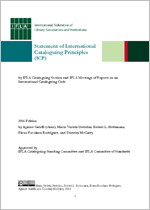 The original Statement of Principles - commonly known as the “Paris Principles” - was approved by the International Conference on Cataloguing Principles in 1961. Its goal of serving as a basis for international standardization in cataloguing has certainly been achieved: most of the cataloguing codes that were developed worldwide since that time have followed the Principles strictly or at least to a high degree.

More than fifty years later, having a common set of international cataloguing principles is still necessary as cataloguers and users around the world use online catalogues as search and discovery systems. At the beginning of the 21st century, IFLA produced a new statement of principles (published in 2009) applicable to online library catalogues and beyond. The current version has been reviewed and updated in 2014 and 2015, and approved in 2016.

The 2009 Statement of Principles replaced and explicitly broadened the scope of the Paris Principles from just textual resources to all types of resources, and from just the choice and form of entry to all aspects of bibliographic and authority data used in library catalogues. It included not only principles and objectives, but also guiding rules that should be included in cataloguing codes internationally, as well as guidance on search and retrieval capabilities. This 2016 edition takes into consideration new categories of users, the open access environment, the interoperability and the accessibility of data, features of discovery tools and the significant change of user behaviour in general.

This statement builds on the great cataloguing traditions of the world, as well as on the conceptual models in the IFLA Functional Requirements family.

It is hoped that the principles in this statement will help to increase the international sharing of bibliographic and authority data, and will guide cataloguing rule makers in their efforts.

For details about accepted and rejected comments received during the internal review (chairs of Permanent UNIMARC Committee, Bibliography section, Classification and Indexing section, FRBR Review Group, and ISBD Review Group) and the worldwide review, see the Comments to the Statement of international Cataloguing Principles.