by Barbara B. Tillett and Ana Lupe Cristán (Eds.) 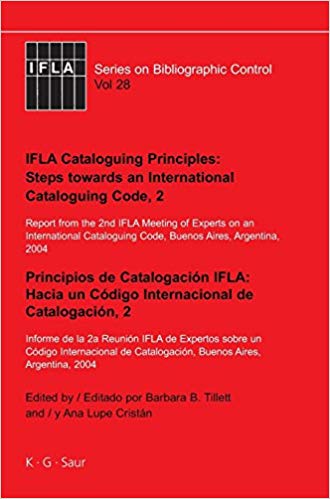 This book contains the proceedings of the second IFLA Meeting of Experts on an International Cataloguing Code, which was held in Buenos Aires, Argentina in August 2004. A large number of international cataloguing experts met on that occasion - just days before IFLA's General Conference was held - to discuss the use of cataloguing rules throughout Latin America and the Caribean.

The first event in the series (Frankfurt, Germany, 2003) formed the start of a process towards an International Cataloguing Code that will continue through 2010.

The proceedings of that meeting were brought together in IFLA Series on Bibliographic Control; vol. 26 (2004).

Future meetings will be held in Cairo, Egypt (December 2005) and Seoul, Korea (August 2006). Their proceedings will also be included in the IFLA Series on Bibliographic Control.