Newspapers of the World Online: U.S. and International Perspectives 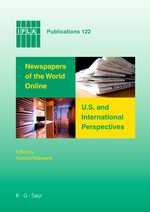 Digitisation has been a hot topic in newspaper librarianship for some
years now; it came as a godsend for many bulky and space-consuming
collections. The major part of this volume comprises the papers given at
the international conference on newspaper digitisation held at the
University of Utah, Salt Lake City (May 2006) and presents the state of
the art, including experiences from current British and North American
projects. This material is complemented by presentations at the World
Library and Information Congress in Seoul (August 2006), focusing on the
East Asian Newspaper situation.