The School Library-Principal Relationship: Guidelines for Research and Practice

The international study of the role of the principal in developing school library programs grew out of interest generated by studies completed in Canada and Australia and reported at conferences of the International Federation of Library Associations and Institutions (IFLA) and the International Association of School Librarianship (IASL). One impetus for the international study, for the Australian and Canadian researchers, was the desire to know if similar findings would emerge from studies conducted in countries with educational systems and school library development that were quite different from those of Canada and Australia. Involving non-English speaking countries in the international study reflected to some degree the diverse cultures and languages of IFLA members.

Need for the Study

The School Library-Principal Relationship: Guidelines for Research and Practice
By James Henri, Lyn Hay and Dianne Oberg
under the auspices of the IFLA School Libraries and Resource Centres Section
​2002
ISBN-13 978 - 90-70916-90-8 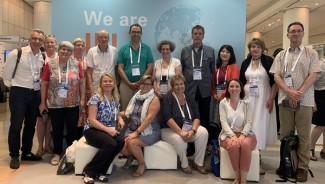