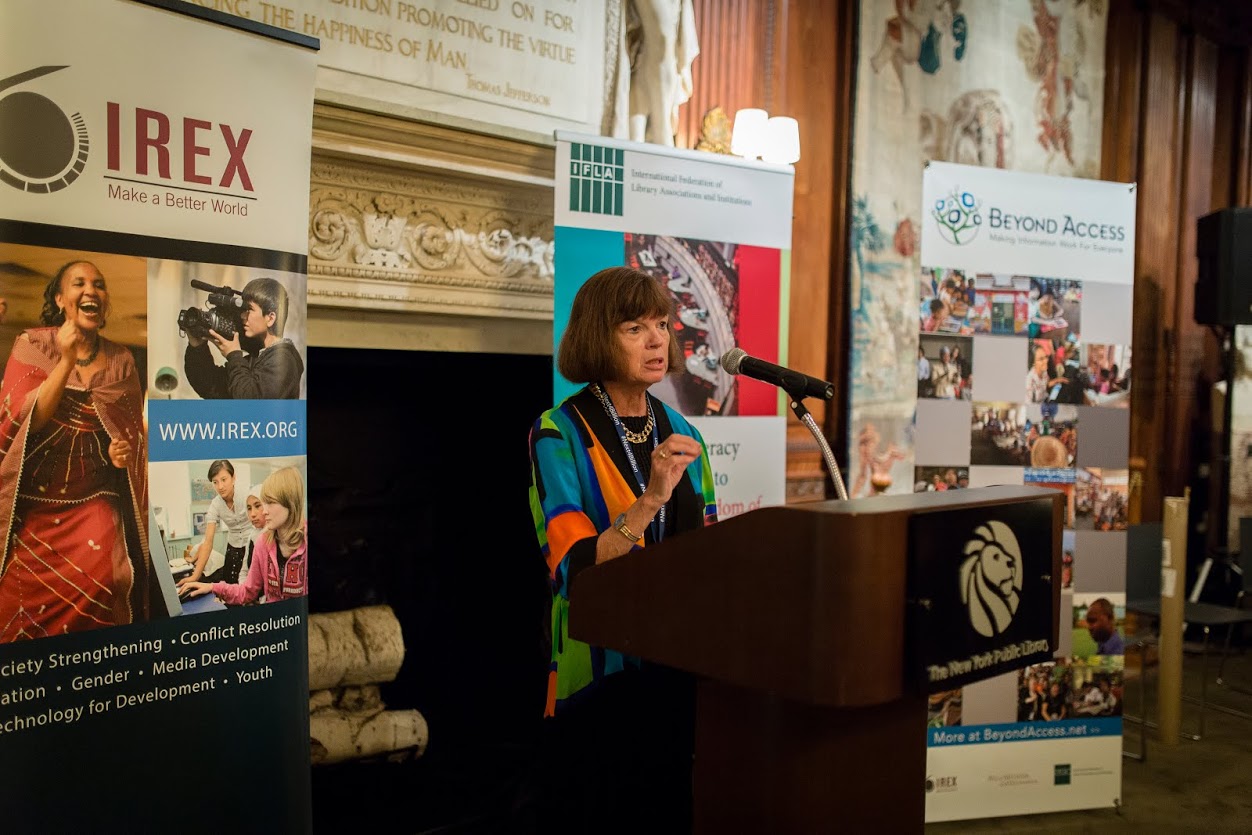 The United Nations (UN) hosted the Summit for the adoption of the 2030 Agenda at the end of September in New York. IFLA has been actively involved in the process of creating the Sustainable Development Goals (SDGs) over the last years and has advocated for access to information, culture, access to Information and Communication Technologies (ICTs) and universal literacy, all of which can be found in the 2030 Agenda, throughout this time.

During the event, IFLA, together with IREX, Beyond Access and the New York Public Library hosted an event on the development challenges ahead and how access to information and ICTs through libraries can help tackle them. Following welcome remarks from New York Public Library President Tony Marx, IFLA President Donna Scheeder led a high-level lineup of speakers including representatives from Mozilla, Beyond Access Myanmar, IREX, the International Telecommunications Union (ITU) and USAID.

Throughout the evening participants from across the library, development and technology sectors discussed the presentations which tackled the importance of access to ICTs for women and girls, the need for greater access to broadband Internet in the community, and the need to support web literacy programmes to ensure that everyone is able to understand the information they find online. Speakers highlighted the key role that libraries play in supporting all of these issues. 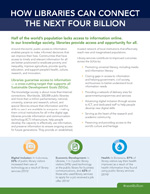 You can also follow the tweets of the evening via Storify.

During the UN General Assembly (GA) the U.S. State Department launched the Global Connect Initiative. The initiative seeks to bring 1.5 billion people who currently lack internet access online by 2020. IFLA, together with a range of other organisations, co-signed a statement by BestBits concerning the launch of the Global Connect Initiative. The statement commends the launch of the initiatives and stresses the importance of access and connectivity for everyone.

States must promote and facilitate universal, equitable, secure, affordable and high-quality Internet access on the basis of human rights, the rule of law, and net-neutrality, including during times of unrest. All of the Internet, for All the people, All the time!

The Future we want includes Culture

IFLA has been an active member of The Future we want include Culture campaign, a collaboration of institutions and organisations which advocate for the inclusion of culture in the 2030 Agenda. The campaign has now issued a final statement welcoming the inclusion of culture and cultural heritage in several of the Goals and Targets. The campaign once again calls on the UN and its Member States to include culture and the organisations which provide services around this, into the implementation of the 2030 Agenda and into the discussion on indicators to achieve the Goals and Targets.

Next up, the United Nations and the UN Statistical Commission are working on the finalisation of the indicators which will enable the success measuring of the SDGs set out in the 2030 Agenda. IFLA will remain involved with the process and will advocate for a set of indicators under Target 16.10 (‘Ensure public access to information and protect fundamental freedoms, in accordance with national legislation and international agreements’) which will reflect the crucial role libraries play in realising this Target as well as further stressing the importance of access to information to realise all Goals and Targets.

What can you do?

You can also find further support materials in our Development Agenda Toolkit. We will also publish a booklet in the coming weeks, outlining what work libraries are already doing in supporting each of the 17 Goals of the 2030 Agenda.