Teen community members are becoming more interested in creating content for themselves or others, not only in “consuming” it, so this is the main reason why the public libraries should assume new responsibilities. Libraries should facilitate the creation of knowledge in the community they serve, as they are considered institutions of knowledge, which not only provide access to information, but to a variety of activities. As a permanently changing and adapting public library, Romanian “Octavian Goga” Cluj County Library is exploring new ways to attract users and meet their needs by developing new programs and services. The Teenagers Department of the library has been organizing a series of activities that involve teenagers making things or content.

The Teenagers Department has often functioned as a maker space and offered them teenagers the opportunity to get involved in tech-related activities (a MovieLab and a MusicLab) and non-tech activities: Handmade jewelry- making workshops, Quilling art workshops and Creative recycling activities.

The tech-related activities were organized as group workshops, under the guidance of professional trainers. The goal of the MusicLab workshop was to assist teenagers in making their own songs, using new technologies. The teenagers had the opportunity to learn the basics about writing lyrics and songs. They were helped to develop their music ideas by two young musicians, a guitarist and a drummer with music studies.

At the beginning of the workshops the trainers explained some music concepts and encouraged the teenagers to sketch the composing plan of their songs. Every one's music ideas were afterwards developed into songs. The participants also added a message to their songs by writing the lyrics and chose the musical instruments and/or voice to be added to the songs. The songs were eventually recorded. The equipment used for recording the songs consisted of a laptop, an electro-classical guitar, an effects processor, a professional microphone, an external sound board, an amplifying station and speakers, a Yamaha keyboard. The result was five hours of unprocessed recordings, ten written songs and over thirty written stanzas and choruses. The teenagers interacted and gave feedback to each other in writing their songs. They were encouraged to use their creativity in developing original songs and to be able to give not only to receive. 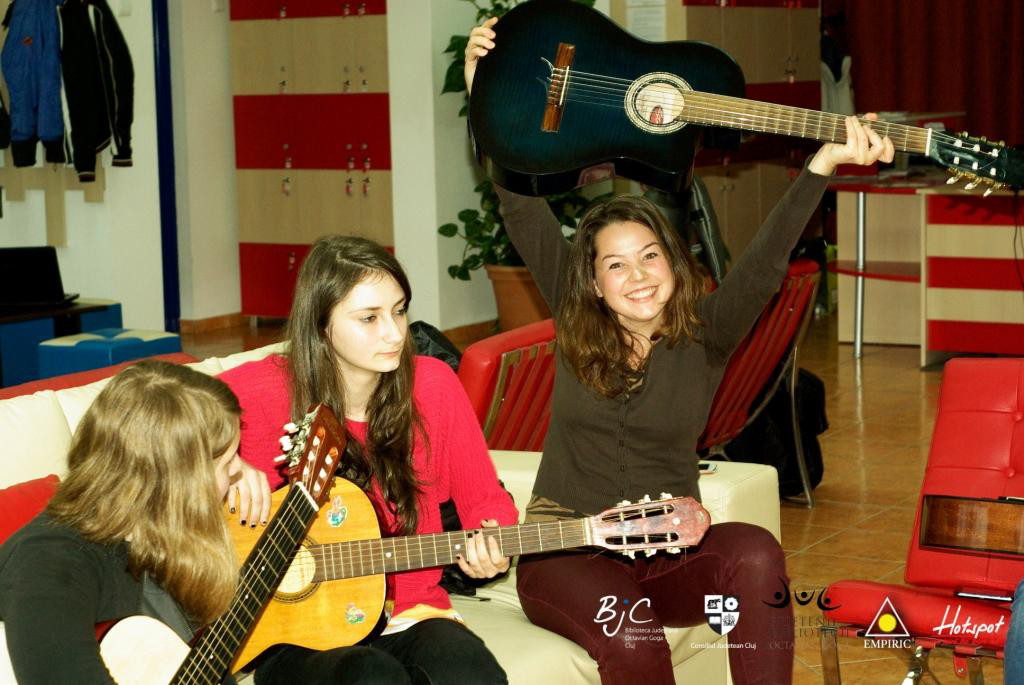 The goal of the MovieLab workshop was to help teenagers gain abilities in making videos and to make them more familiar with the world of cinema and video production. The workshop was structured in order to present to the participants the main stages in making an audio and video material, especially a fiction film. With the help of spoken oral presentations, along with examples of famous videos from the history of cinema, the participants were introduced to the terms used in the film industry, which they afterwards applied in the practical exercise, helping them develop a film education.

Starting from thewith elements of visual perception, the basics of movie production were identified and defined. The teenagers were taught shown how to see films differently and to understand why a certain angle or a certain way of telling a story were chosen and how these choices change the perception of the public. The workshop helped them better understand the concepts of movie, media and image. The teenagers were encouraged to make their own short films on a theme chosen by them, to make a trailer for a movie given by the trainer, or to write a short screenplay.

Making a trailer for a movie was a very successful exercise, combining the video editing part and that of writing a story. The films, chosen by the trainer, were award-winning films, but without much international success in the mainstream cinema, the teenagers being allowed to choose only the film genre. Even if at first they seemed as disappointing films, the students were able to appreciate the films that otherwise they would not be interested in watching. The screenwriting exercise chosen led to the writing of short stories and helped the teenagers understand the utility of the script and the structure of the stories.

The participants who chose to make their own short movies proved to be very creative. The workshop led to the production of eight short movies, ten trailers, four storyboards and a script. The equipments used for the workshop included laptops, PC tablets, a projector and a projection screen, a TV, video cameras and an editing software.

The non-tech related activities were held as creativity workshops. The librarians from The Teenagers Department offered the participants quick demonstrations and printed guides which they could use during the workshops. The activities varied from making original jewelry, to making artistic objects from coloured strips of paper or from recycled materials.

The Handmade jewelry making workshops were based on the creativity and skills of young people and on their desire to wear original jewelry pieces created by them and to make special original gifts for their family members and friends. Even if the library offered models, the teenagers proved to be creative by altering the given models in order to have original results.

The Quilling art workshops introduced teenagers to the art of quilling. They made greeting cards, earrings, Easter eggs, paintings and other things. They make them, for themselves or as gifts for others.

The Creative recycling activities were meant not only to determine a positive attitude towards the environment, but also to make participants aware of the fact that many things can be recycled and reused in a creative way. The results they obtained really surprised them, because they did had not expected to get such good- looking and useful objects out of something they would usually throw away. They made textile brooches, pencils holders out of toilet paper tubes, newspaper boxes and decorative baskets, used jars flower vases and other objects. 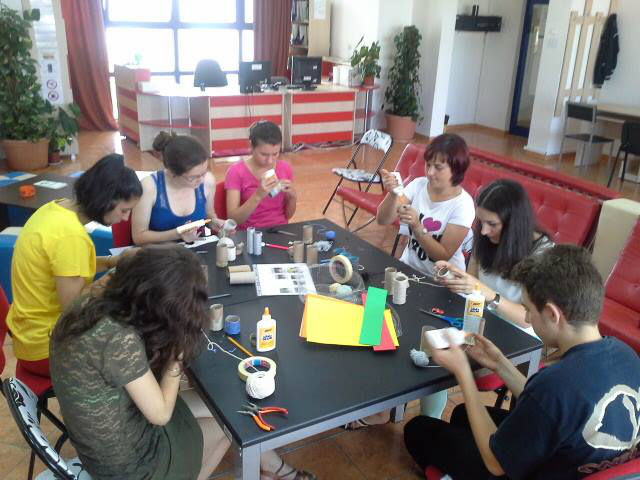 The activities which determine for teenagers to create something have several positive incomes. They:

The teenagers that attended the workshops came to the library not only to make things, but also to make friends.

It is important for young people to learn to make and reuse things in a creative way. It is not only a rewarding activity, but also a relaxing one. They can even make a hobby out of an activity, which they can later transform into a profitable business.

The library environment must support learning through practical activities, must encourage teenagers to experiment, to explore and to be innovative. Some are more talented and inspired than others, but the things each one makes can be much more beautiful than the ones found in stores, because of its added value – the passion of the maker and the originality of the result.

By strengthening their position of MakerSpaces, by providing maker-focused learning activities, the libraries will be more relevant for their communities because they will help provide teenagers with the skills they will need to succeed in their professional life.