Art, Culture and Information in the Perspective of the 2030 Agenda 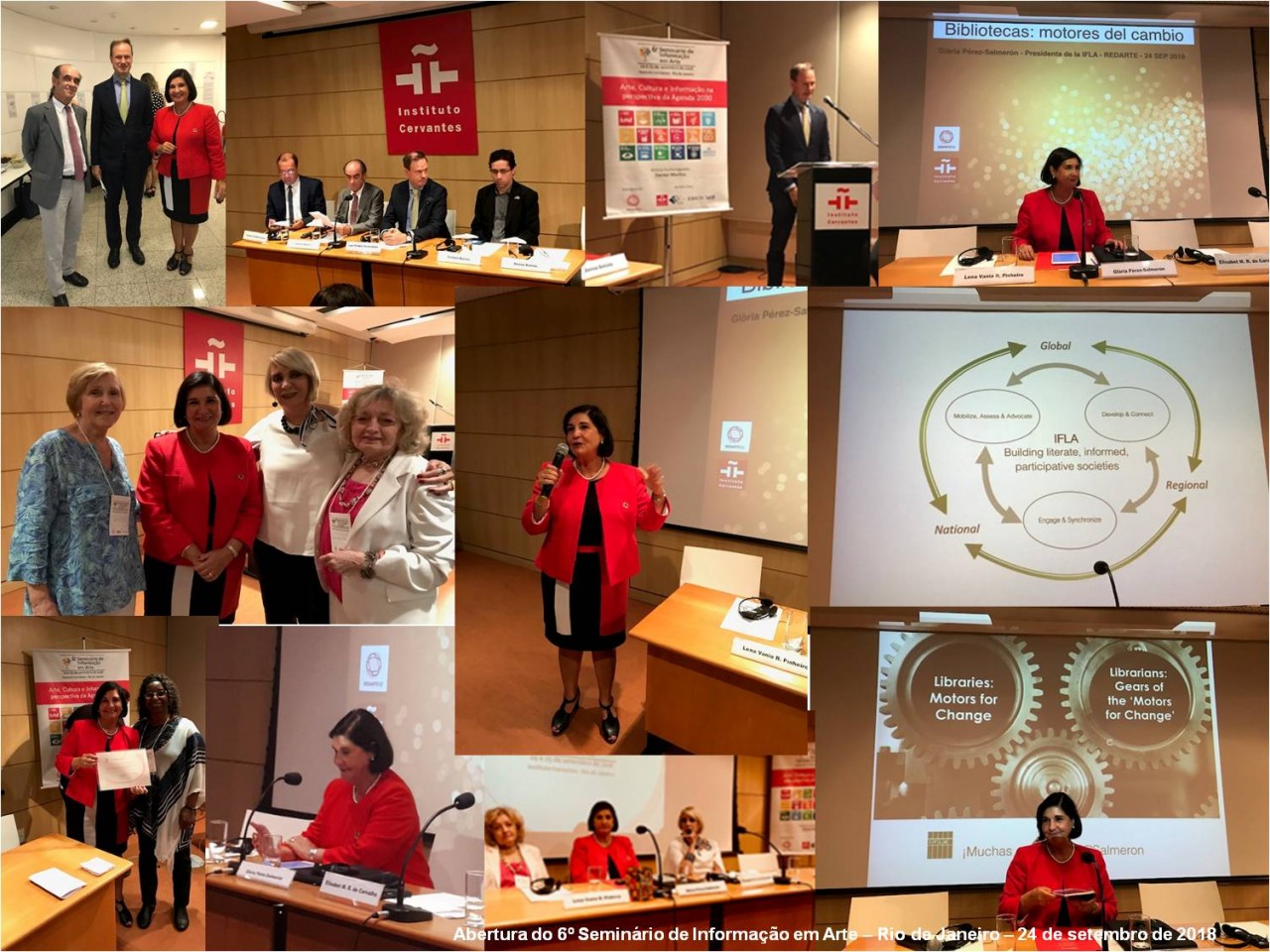 On September 24 and 25, 2018, in Rio de Janeiro, Brazil, the 6th Art Information Seminar was held, with the theme "Art, culture and information in the perspective of the 2030 Agenda". IFLA President, Glòria Pérez-Salmerón, was the guest of honor of this event, organized by the Network of Libraries and Art Information Centers in the State of Rio de Janeiro (REDARTE/RJ), with the sponsorship and support of the Cervantes Institute of Rio de Janeiro. The seminar was preceded by a technical meeting on September 22, at the Cervantes Institute, with the theme "Associative movements, information on art and sustainability". IFLA's work on development and the fundamental role of libraries in the 2030 Agenda were the inspiration for choosing the central theme of these events.

The technical meeting had the special participation of Antonio Maura, Director of the Cervantes Institute, Denise Maria da Silva Batista, President of REDARTE/RJ and Glòria Pérez-Salmerón, IFLA President, who spoke about the work of IFLA and the role of librarians in society and their commitment to the 2030 Agenda. The meeting was moderated by Isabel Ayres, Secretary of the Section of Art Libraries of IFLA, and included presentations by Adriana Ferrari, President of FEBAB, Marcos Miranda, representative of the President of the Federal Council of Librarianship; and Alpina Rosa, Treasurer of REDARTE/RJ. The event was attended by authorities from the areas of education, culture and arts, leaders and representatives of libraries, collaborators, sponsors, library professionals, authors, professors and students.

The objective of the seminar was to contribute to the dissemination and discussion of the 2030 Agenda and the role libraries play. It was inaugurated by Luis Prados Covarrubias, General Consul of Spain in Rio de Janeiro, Antonio Maura, Director of the Cervantes Institute of Rio de Janeiro, Gustavo Barreto, Information Advisor of the United Nations Information Center for Brazil (UNIC Rio), Adauto Cândido Soares, Communications and Information Coordinator of UNESCO in Brazil, and Denise Maria da Silva Batista, President of REDARTE/RJ.

Next, the IFLA President offered an impressive opening speech in which she emphasized the importance of the social role of libraries as engines of social transformation and of librarians as enablers and multipliers of individual and collective actions that can positively impact communities where libraries are, and the world. The event included a debate and interesting presentations by representatives of IBICT, IFLA-LAC Section, REDARTE/RJ, FEBAB, Fundação Biblioteca Nacional (FBN), Pinacoteca de São Paulo, Castro Maya Museums, PPGCI/UFF, Fundação Casa de Rui Barbosa and the System of Libraries and Information of the Federal University of Rio de Janeiro - SiBi/UFRJ.

This project was carried out thanks to a collaboration of REDARTE/RJ together with the Brazilian Institute of Information in Science and Technology (IBICT) and the support and sponsorship of the Cervantes Institute of Rio de Janeiro. The event had as sponsors: Cervantes Institute, Sophia Library, Proquest, Scansystem and EBSCO, and supported: FEBAB, IBICT, CRB7, SINDIB/RJ, APCIS/RJ, GIDJ/RJ, Contempory and Data Coop.