The United Nations is presently reviewing the Millennium Development Goals (MDGs) so that it can prepare a new development framework for the post-2015 period. The framework will guide developed and developing countries in improving living conditions for citizens. There are several parts to this process:

Concurrently, it is reviewing the World Summit on the Information Society Process (WSIS) to reflect upon its impact and to produce recommendations on WSIS beyond 2015 to the UN Secretary General in September 2014. It is currently thought that the WSIS recommendations will contribute to the Secretary General’s thinking regarding any new development framework.

Figure 1 illustrates the process – but note that it is still unclear at which point the WSIS recommendations will be formally introduced. 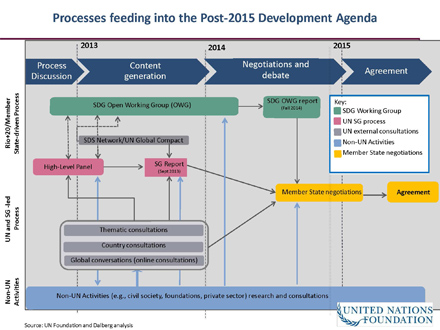 Why is the Post-2015 Development Framework Important to Libraries?

The new framework is likely to comprise of a number of goals. UN Member States will be expected to work towards these goals which will contain a number of indicators for measuring progress. Presently, the Report of the HLP is guiding thinking on the areas that are likely to be covered by concluding that the post-2015 agenda needs to be driven by five transformative shifts:

Whatever the eventual framework looks like, it would be a positive outcome if libraries were able to identify ways to contribute to helping member states achieve the goals. Therefore it is important that libraries are seen as being part of the conversation, and that we gain a profile as an actor who can support the development process. A good outcome would be if access to information is recognised in the framework.

What are IFLA’s Aims and Objectives?

IFLA wishes to see libraries engaged as partners in development activities, receive support from decision makers and continue to support access to information in all its forms for all users. If at the end of the process the post-2015 framework recognises the role of access to information as a fundamental element supporting development then a concrete space will be opened up for library advocacy in the development sector. IFLA members at national and regional levels will have an opportunity to identify themselves in the framework’s language, communicate the value of libraries to users, policymakers and donors, and work to support development through projects, policies and impact evaluation.

How will IFLA Engage with the Post-2015 Development Framework Process?

IFLA will employ three strategies to achieve its objective: