Thank you from the IFLA Secretary General

Thank you from IFLA Secretary General from IFLA on Vimeo.

Colleagues from around the world,

Thank you so much for voting and contributing to the IFLA Global Vision discussion! We have an incredible result. When the voting ended on Monday 16th October, we had received 22.000 votes from 213 countries and areas of the world, from 190 out of 193 UN Member States. This is a fantastic response!

You have made this a truly global conversation with votes coming from every single continent.

But, this was just the beginning!

We are preparing even more exciting things for the next stage!

Our team is now analysing the results of this global discussion, including the kick-off meeting, the regional workshops, the self-organised workshops and the online voting. It is really an intense process, since we want to ensure that all voices are heard!

Next March, at the IFLA President’s meeting, we will launch the IFLA Global Vision report. Then we will discuss with you how we can bring the vision to reality.

This has been an enormous success and a wonderful journey.

Stay tuned for news. Keep the discussion going, by using the #iflaglobalvision hashtag in Twitter!

If this was just the start, imagine that, what is coming next, will be even more inspiring!

Don’t forget: Together we create the future!

Thank you so much for your contribution. 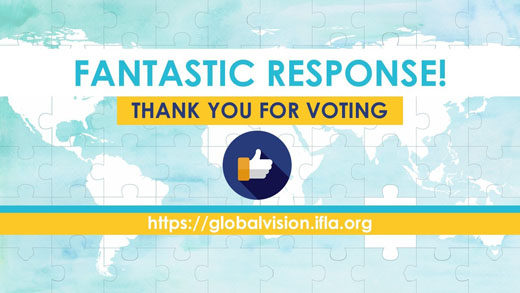