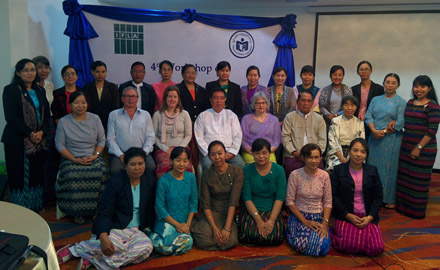 Participants at the BSLA workshop and stakeholder meeting, 25-27 January 2016 in Yangon, Myanmar

IFLA implemented the Building Strong Library Associations programme with the Myanmar Library Association (MLA) from 2013-2016. The project commenced at a critical time for the country, as the government began a process of ‘opening up’ after 50 years, and concluded in 2016 as a newly elected democratic government took office. The transformational role that access to information and libraries can play in nation building in a new democracy became a key focus for the BSLA programme in Myanmar.

Under the BSLA umbrella, MLA participated in four workshops, a stakeholder meeting, regional activities with other associations, and partnered with the Singapore Library Association and National Library Board on book donations and training. Michael Robinson was core trainer for the project. The project culminated with the final workshop and a stakeholder meeting, 25-27 January 2016. The goals of the project were:

MLA made significant progress in each of these areas during the project, supported by broader reforms in the country that meat that it was possible for non-government librarians to join the Executive Committee (board) for the first time that spurred the creation of a more representative, inclusive association. By 2016, requirements for joining the association had also eased, permitting any librarian including public librarians to join. MLA has offered training courses, partnered with the Asia Foundation to develop six high school libraries, and has links to a model public library project in collaboration with Singapore, EIFL and Beyond Access through its Executive Committee members. Now with the transition to democracy, MLA seeks to increase its advocacy role and is already part of consultations on a new copyright law and national library law. Regionally, MLA will host the next CONSAL conference in 2018, a key opportunity to highlight to policy makers the contribution libraries make to development.

Myanmar society, and the library sector, has undergone remarkable change since 2011 that have begun to increase access to information and paved the way for investment. The lilfting of EU sanctions, new media laws (though not without controversy), abolition of pre-publication censorship and dramatically reduced costs for mobile phones and Internet, dropping from US$150 to $1.50 for a SIM card in just 2 years. Myanmar is suddenly part of a digital environment that its neighbours had years to adapt to. 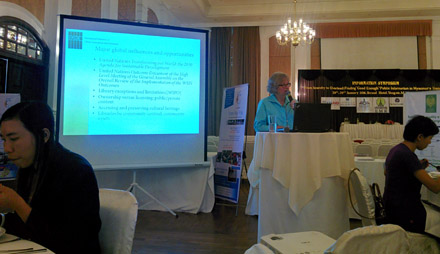 The opportunities and issues that this new environment brings were the subject of a symposium that IFLA participated in 28-29 January 2016 in Yangon, From Scarcity to Overload: Finding “Good Enough” Public Information in Myanmar’s Transition. Reflecting on the IFLA Trend Report, Secretary General Jennefer Nicholson highlighted global concerns including privacy, access to information, technology and commercial interests in her keynote address that will impact Myanmar, and the role that libraries can play in supporting citizens’ digital literacy and decision making about their own lives. IFLA Manager Development Programmes Fiona Bradley noted the role MLA has as a long-standing national organisation in bridging international and local organisations to coordinate development of the library sector at a time when the number of projects and vendors is increasing rapidly, and Myanmar signs up to more international and regional agenda and treaties. By advocating at the national level, access to information and libraries can be included in international development agendas such as those agreed at ASEAN and the UN Sustainable Development Goals.

IFLA will continue its partnerships

MLA is now thriving, but libraries need resources to meet new needs. Myanmar has a huge number of academic, government, public and community libraries. They can help reforms reach across the whole country at the local level. However successful reform needs accurate information and data to be able to make the right decisions. At the national level, the Parliamentary Library has become an essential support for policy makers, providing research and advice as Myanmar has been passing a huge amount of new legislation. Locally, public libraries need to overhaul their collections and services so that trust can be built. Society will need to support and champion libraries so that they can achieve this goal. Media, Right to Information campaigners and others should seize the opportunity to partner with libraries. Right to Information laws, copyright reform, and a national library law are being drafted. At the same time, people need to be aware of their right to privacy, and gain media and information literacy skills to critically evaluate information. These are all issues in which the library sector in Myanmar can and will play a key role. IFLA will continue to partner with the Myanmar Library Association on regional and national initiatives.