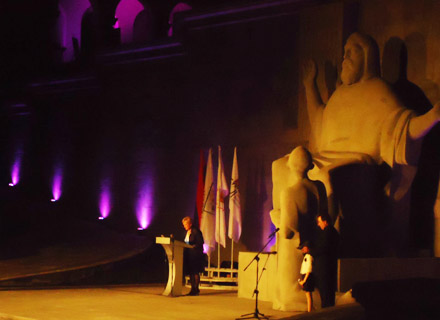 In a festive celebration two days ago in Armenia, IFLA President Ingrid Parent witnessed the official hand over of the World Book Capital for the year 2012 to the city of Yerevan (Armenia).

The city of Yerevan was chosen for the quality and variety of its programme, which is "very detailed, realistic and rooted in the social fabric of the city, focused on the universal and involving all the stakeholders involved in the book industry", according to the members of the selection committee.

Each year, UNESCO and the three major international professional organizations from the world of books - the International Publishers Association (IPA), the International Booksellers Federation (IBF) and the International Federation of Library Associations and Institutions (IFLA) - designate a city as World Book Capital for one year, between two consecutive celebrations of World Book and Copyright Day (23 April). This initiative is a collaborative effort between representatives of the main stakeholders in the book industry, as well as a commitment by cities to promote books and reading.

During the opening festival on the 22 April, special attention was also given to the 500th anniversary of book printing in Armenia.