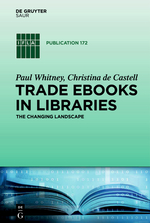 With the advent of downloadable retail eBooks marketed to individual consumers, for the first time in their history libraries encountered an otherwise commercially available text format they were prevented from adding to their collections. Trade eBooks in Libraries examines the legal frameworks which gave rise to this phenomenon and advocacy efforts undertaken in different jurisdictions to remove barriers to library access.

The principal authors provide a general historical overview and an analysis of library/eBook principles developed by a variety of library associations and government reviews. In addition, experts from twelve countries present summaries of eBook developments in their respective countries and regions.

*IFLA Members receive a 30% discount on standing orders of titles published by De Gruyter in the IFLA Publications Series. IFLA Members can also order select individual or backlist titles with up to a 25% discount.