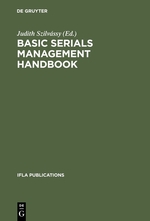 During long years of involvement in diverse serials-related activities with international bodies like UNESCO; International Organization for Standardization (ISO); International Federation of Library Associations and Institutions (IFLA), the basic concepts and operations appeared obvious. However, on taking up assignment to set up a national centre in one of the less developed countries, I realized that there was a widespread lack of understanding of serials, even of information science and librarianship in general.

At the same time, as the years passed, I learned to appreciate the tremendous willingness to learn on the part of the staff I was training. After five years they were perfectly capable of working at an international level.

When, following an account of my experiences, I was approached by the IFLA Section on Serial Publications to write a handbook on serials management for librarians in less developed countries, I had a clear idea about their needs, but also about the complexity of the challenge I was facing.

The target audience to whom the manual was to be addressed was assumed to have little or no library training and certainly none in serials librarianship. For this reason I felt myself compelled to start from the basic level offering step by step guidance through the various fields of serials management. Accordingly, the general approach adopted throughout the handbook consists in outlining briefly the theoretical/historical background followed by the presentation in italics of the corresponding operational procedures. It should be noted, however, that the latter are described as examples of good practice rather than meant to be prescriptive, and some sections apply, inevitably, also to monographs and other types of documents. Where deemed necessary, the text is accompanied by illustrative examples.

The concluding chapters outline the more advanced automated library technologies and introduce the reader to the role of relevant international bodies. Hints and suggestions are also offered on potential sponsors and donors assisting libraries in creating and updating their holdings.

The seven annexes, the lists of definitions, acronyms and the recommended literature are expected to assist the librarian in his/her daily work. I wish to express my sincerest appreciation to the members of the Section on Serial Publications and all those who have assisted me with their advice and encourage-ment in completing the handbook. Particular thanks are due to Hazel Woodward, Section Chair, to Ross Bourne, the referee of the text and to Elayne Meredith Wanke to whom I am indebted for polishing my English.

Guidelines, Serials and Other Continuing Resources