Getting Started with the Marrakesh Treaty - a Guide for Librarians 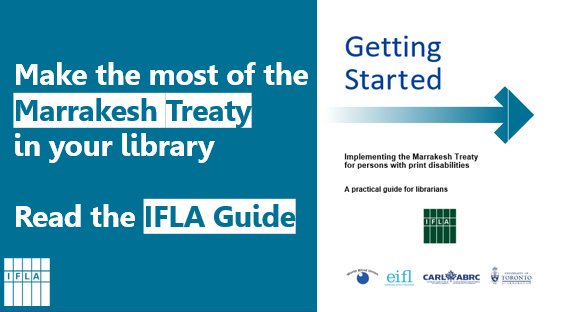 The Marrakesh Treaty entered into force in September 2016, faster than any other international copyright text in the last 40 years. It promises to remove some of the key barriers to access to information by people with print disabilities.

Yet the Treaty will only be effective, where it has been incorporated into national law, when libraries and others are using it. Not all librarians feel confident in dealing with copyright law, potentially leaving users without the access they need.

This guide, edited by Victoria Owen, and with the welcome support of the World Blind Union, the Canadian Association of Research Libraries, Electronic Information for Libraries, and the Unviersity of Toronto, offers answers to frequently asked questions. It can also be adapted by national actors to their own laws - IFLA encourages this, in order to get the largest possible number of libraries involved.

The guide is available in the following languages:

The guide has been adapted to the following legislations: