Definition of PRESSoo: A conceptual model for Bibliographic Information Pertaining to Serials and Other Continuing Resources 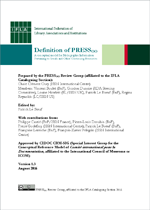 PRESSOO is a formal ontology designed to represent the bibliographic information about continuing resources, and more specifically about serials (journals, newspapers, magazines, etc.). It is an extension of the FRBRoo model (Functional Requirements for Bibliographic Records – Object Oriented). FRBRoo is in turn is an extension of CIDOC CRM, the conceptual reference model for cultural heritage information.

PRESSoo aims to propose answers to long standing issues with the application of the FRBR family of models to serials and continuing resources. Work on this model began in January 2013. Version 0.5 was released in April 2014, and submitted to the IFLA FRBR Review Group for reviewing. Version 1.0, endorsed by FRBR RG, has been released in June 2014.

PRESSoo version 1.0 underwent a world-wide review in 2015. The responses were studied and changes were made to the model in light of these responses.

Comments on the responses received during the review.

On 19 August 2015, the Standing Committee of the IFLA Cataloguing Section decided to form a review group dedicated to the maintenance and evolution of PRESSoo.