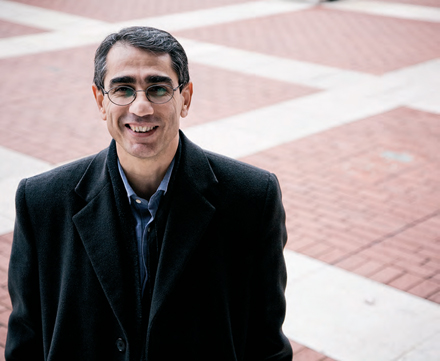 Ten years ago this April Iraq’s National Library and Archives was burnt to the ground and its collections looted.  Director Saad Eskander and his staff have braved dangerous conditions to rebuild the Library.

What was the situation like for the Iraq National Library and Archives (INLA) before the invasion?

I lived in exile before the 2003 War, but I know that the INLA was in an extremely bad state administratively, financially and culturally.

Because of the former regime's policies of rearmament, militarization of society, waging wars of aggression and brutal suppression of internal opposition, the leaders of the regime sharply cut down the Library’s budget. For these reasons, the Library was not able even to meet the minimum of the academic and cultural needs of its readers, who were independent scholars, university professors, research students and journalists.

What made the situation even worse for the readers is the fact that the regime imposed an extremely restricted censorship regime on the collections. Old publications and important records were removed from the stacks and placed in isolated rooms to which the readers had no access.

This also meant that the librarians had to make sure that when purchasing or acquiring new publications their content did not form "an ideological threat" to or question the prevailing Baath ideas and ideals. For more than 20 years, the INLA was not able to purchase publications from abroad. All the new publications were acquired through legal deposit law, which obliged all Iraqi publishers and authors to send 5 copies of their publications to the INLA. The staff's living standards were very low. The average monthly salary was not more than six or seven dollars.

In the late 1990s, to monitor the activities and the interests of the readers, the General Security Directorate planted some of its agents in the Library main reading room.

Can you tell me what happened at the INLA in the aftermath of the invasion?

I wasn’t here during that time, but apparently the destruction and looting of the INLA lasted a few days. According to the eyewitnesses whom I met later, including the INLA's staff, the building was left unguarded just before the fall of Baghdad. Some archival and book collections were relocated in another building. But there were considerable damages. Around 25% of the publications (including rare books) and 60% of the records were destroyed or looted. 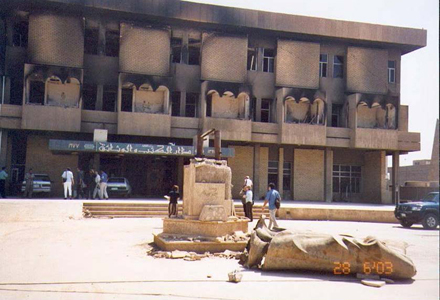 You became the new Director General in 2003. What were the first changes you introduced?

As soon as I assumed my role, I introduced a number of radical changes well before the reopening of the Library and archive reading rooms.

I injected new blood into the organisation by hiring tens of young men and young women, mostly newly graduated people. The number of staff rose steadily from 65 in 2003 to 450 in 2011.

Through training inside and outside Iraq, tens of librarians, archivists and technicians acquired practical and theoretical skills. Through my own initiatives, the INLA was able to provide special training for its staff in several countries including Italy, Britain, Czech Republic and the US.

Administratively, the INLA witnessed considerable changes. Decision-making has been democratized. The librarians and archivists have the right to express their views and elect the heads of their departments. Female staff have formed their own society to defend their rights, and to carry out charity activities and cultural events. 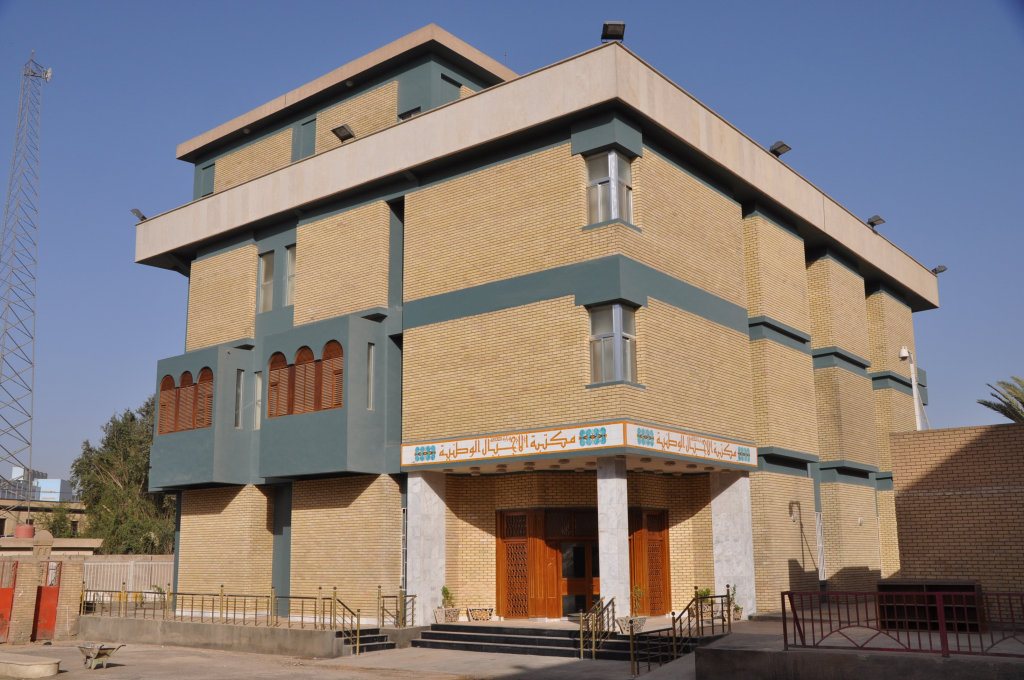 What about new projects and developing your collections?

A lot is going on. We founded the first restoration laboratory in Iraq with the financial help of the Czech Republic. Czech experts trained my restorers in Prague and in Iraq. All the equipment for the laboratory was brought from Germany. We encouraged other cultural institutions to follow our step in preserving Iraqi cultural heritage.

We also replaced the old microfilm department, which was burnt down during the chaotic period of April 2003. Instead of outdated microfilm equipment, we acquired the newest equipment from Europe. Once again, the Czech government funded the purchase of microfilm equipment. The Ohio Genealogical Society in the US sent us four of its microfilms cameras. So far, more than a half million records have been microfilmed.

The INLA was the fifth institution to join the World Digital Library Project and we’ve put special emphasis on digitisation. Through purchases and gifts we could set up the first advanced IT department in Iraq. Our IT staff regularly receive training inside and outside Iraq. Tens of thousands of records and periodicals have been digitized.

Last year, with financial help from the EU and in partnership with the Italian NGO Un Ponte Per, we were able to implement an Iraq-wide training course on digitalization, database and web management. More than 18 universities and cultural institutions took part. This year, the Italian Ministry of Foreign Affairs will fund a new project, which will be in part a continuation of the EU project. It involves the establishment of a digitalization and restoration laboratory for Iraqi movie archives. We expect that a number of staff will be trained in Bologna's film studios. We also hope that soon we’ll be able to open our sound digitalization department with the aim to digitalize and preserve traditional Iraqi music.

We’ve also started the construction of a five-storey building, which will be called the Digital Library. It will cost around 19 million dollars. The idea is that readers can use our digitalized audio-visual collections, periodicals, books and records on-site or via the internet.

The Generation Library, a national library for children, was completed last year. We expect to provide it with all the necessary publications, furniture, audio-visual materials and equipment before the end of the year.

And last month, the National Library was physically separated from the National Archives as the new building for our archival collections was completed. It has five floors of storage space and two floors for offices and the microfilm laboratory.

What is the legacy of the past regime’s culture of censorship?

We adopted a new liberalization policy by removing all types of censorship. All publications are accessible. Old banned books were returned to the Library stacks and have been available for the readers.

In developing our collections, we’ve put a special emphasis on those publications which contain new theories in social sciences and humanities. This is because we think it is vital that the Iraqi people must put an end to the one-sided interpretation of social, political, economic and cultural phenomena inherited from the former dictatorial regime.

Our new collections encourage readers to be open-minded and use different theories in their analysis and interpretations.

The library collections have increased by around 30% and our archival collections by 60%.  They have grown so rapidly that we now need to construct a new three-floor building for newly acquired publications.

Have you been open for readers all this time?

The Library main reading was reopened in early July 2004, well before the beginning of the renovation of our destroyed building.

We began to serve our readers amidst the destruction, even though we did not have any budget. We had electricity for two or three hours a day. It was very cold in the winter and very hot in the summer inside the Library. My staff used to wear masks and gloves because of the bad fumes from the fires of 2003 and the thick dust that covered all the surfaces.

We never closed our doors except for a few days during the height of the civil war (2006-2007). Seven of our staff lost their lives and many more were either injured or displaced.

Now the number of our readers has risen from 120 a month to 1500 a month – it is a record. Moreover, for the first time in the INLA's history our readers come from all the 18 provinces in Iraq.

Is there support for what you are trying to do outside the library?

If you mean the public, the educated class and the Iraqi media the answer is yes. That is what has motivated us to work even harder.

There are still violent attacks around the country and in Baghdad. Has the Library been affected?

Terrorist attacks have never stopped. But we have got used to them. From time to time, we receive intelligence reports that the INLA may be attacked by the terrorists. All we can do is to ask the INLA's guards to be more vigilant and to search the visitors even more carefully than before.

How has the Library been affected by sectarianism?

I never allowed sectarian culture and values to take root inside the Library. I always tried to re-educate my staff about what was happening and how our everyday cultural work was vital for the unity of the nation and for overcoming hatred and prejudice.

But as I mentioned earlier, outside the Library it has affected the lives of our staff. Our staff have been murdered for sectarian reasons and many more were injured or displaced. They have lost members of their own families and their properties were damaged by explosions or looting.

Are there efforts to reclaim what was taken from the Library back in April 2003?

Unfortunately, despite our continuing efforts, so far we have managed to recover only 200 rare books from the 3000 which we lost during the chaos of 2003.

How do you and your staff cope with the stress that the circumstances must bring on?

We cope with the tragedies and the difficulties of our life by carrying on with our work, by always being optimistic about the future, by appreciating our role and by keeping our morale high.

We organize cultural activities – concerts, plays, art exhibitions – and charity work to help the less fortunate members of our society.

There is also a small radio station inside the building run by staff. It has cultural and entertainment programs.

To keep the morale high, I find it very important to spend most of my time talking and working with my staff. I tour the departments almost every day. And I make sure that I use some" British humour" to put a smile or two on their faces.

What do you hope for in the future?

I want to turn the INLA into a leading cultural force in rebuilding the new Iraq. I want to broaden its social responsibility by playing a constructive role in the transition from dictatorship to democracy, and replacing old regressive cultural values by new progressive cultural ones.

I also hope that when the Digital Library Project is completed scholars and students from around the world can use our collections.

And moreover I hope for peace, security and prosperity to prevail not only in Iraq but throughout the Middle East.