by Barbara B. Tillett, Renate Gömpel and Susanne Oehlschläger (Eds.) 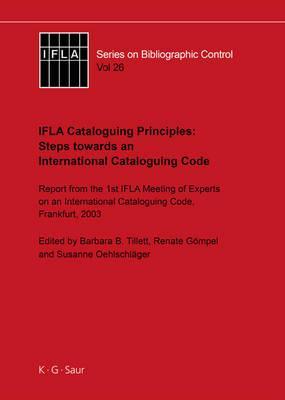 This book contains the proceedings of the First IFLA Meeting of Experts on an International Cataloguing Code, which was held at Die Deutsche Bibliothek, the German National Library at Frankfurt/main. 54 cataloguing experts, representing 32 European countries, met in July 2003, immediately prior to IFLA's General Conference in Berlin (August 2003).

The goal for this meeting was to increase the ability to share cataloguing information worldwide by promoting standards for the content of bibliographic records and authority records used in library catalogues.

Drafts of a Statement of Principles were discussed during this conference, and following by email. The final text was approved by all participants in December 2003.

This event was intended to be the first in a series of regional meetings worldwide to discuss a new statement of cataloguing principles with the rule makers around the world, the second will be held in Buenos Aires in August 2004.