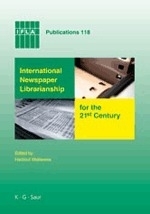 This volume consists of presentations
at recent events of the IFLA Newspapers Section in Oslo 2005,
Canberra 2005, Buenos Aires 2004, Shanghai 2004, Berlin 2003
and Cape Town 2003. It covers the variety and intensity of
newspaper activities worldwide, emphasising both regional activities
and current work in the fields of the preservation and
digitisation of newspapers, and including reports on the ongoing US
and UK projects. Another essential subject covered in this
volume is the very complex issue of newspapers and copyright. This
publication presents the current state of newspaper
librarianship on all five continents. It reflects not only the
remarkable
progress made during recent years, but also the major
challenges for the future.