MakerSpace gives young people  access to space, materials and tools to be creative, with a splash of library awareness.

Note: the term ‘MakerSpace’ in this article refers to the specific activity and event held at Moree library, the term ‘makerspace’ is used to refer to the concept generally.

Moree is situated in far north-west New South Wales, Australia. It is a regional township of about 10 000 people, and is well known for the agricultural livelihood, predominantly cotton farming that exists in the region as well as its artesian spa baths. The MakerSpace is a recent addition to programming at Moree Community Library (MCL) and was established to boost Children’s Services and, particularly, engage younger members of the community with the library. Another reason for establishing the MakerSpace was to bring something of popular and common existence in metropolitan areas and public libraries to a regional setting.

Artefacts interacting with the library collections

At the moment, our MakerSpace is run one afternoon a week for a duration of one hour, during school terms. It began as a space for young people to be creative using some basic materials, with a splash of library awareness. The latter was an important aspect to the Space and was originally brought about by sharing new items for young people from the library’s collections. It has developed in to MakerSpace participants creating art works that interact with or draw upon items in library collections, as well as displays for significant events. An example of this is our ANZAC (Australian and New Zealand Army Corps) commemorations, explored in more detail, below.

At the time of the first MakerSpace, the library was holding a book sale and the idea to repurpose some of the items in the sale to use in the MakerSpace was quickly snapped up. The project or outcome of the sample of books was not clear, on purpose, as two members of the library team or the facilitatoris wanted to give participants the opportunity to explore their own ideas with these provided materials. It did not take long for ANZAC stories to come in to the MakerSpace. The year 2015 marks the 100th year anniversary of Australian and New Zealand soldiers landing at Gallipoli during the First World War; a significant moment in the country’s history was a substantial topic in classrooms, on TV programs, and in local shops right across the country. In MCL’s MakerSpace it became a focus of the first collaborative piece – a paper wreath and poppies. The books had found their (new) purpose.

Library networks and library-invested people sharing and linking their ideas on social media continue to provide library staff at MCL with crucial support for the MakerSpace, including the concept of hover marks, which was speedily shared with participants in the MakerSpace. Using recycled paper, participants selected a favourite title or subject from the Junior Fiction or Junior Non Fiction collections and created their own hover mark for a book. A theme of the first term of the MakerSpace was undeniable – paper craft. Also, something that couldn’t be denied, was an exhibition of the creations built in the first ever term of a MakerSpace at MCL. This was so wonderfully timed with Youth Week and we couldn’t think of a better way to celebrate the week by drawing attention to art work created that had been created by young people in a youth-oriented space.

Recently, when asked to explain the concept of the hover mark to a visitor in the MakerSpace, one young participant aptly explained “it’s like a book mark but it draws your attention to the book when it’s on the shelf”. Indeed, the makerspace is a learning space. For the reason that each individual does this differently, the need for expectations and guidelines for the space became apparent early on. What was important was that library staff devised these in collaboration with MakerSpace participants. Our expectations are revisited each week at the beginning of each MakerSpace. 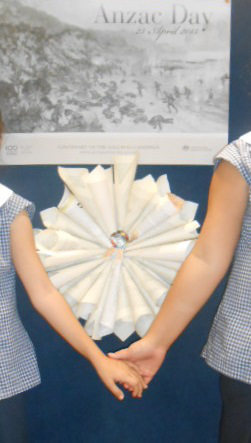 MakerSpace has an impact on users, facilitators and community

The MakerSpace has had a wider impact than first predicted. The creations built, both collaboratively and individually, have contributed to meaningful and creative exhibitions in the branch held to celebrate significant local and national events. These exhibitions have essentially passed on information and ideas which have built on existing knowledge held by any and all library patrons and visitors who come in to the library and view the displays. They have contributed to the goal that any community library might aim to achieve, to provide access to experiences that are enriching.

Unforeseen occurrences that have come about as a result of the MakerSpace have also contributed to our original goals, which included community engagement with the library. An example of one of these occurrences is being approached by a member of the community who was familiar with makerspaces and keen to share skills and brainstorm projects and ideas with members of the community in such a space. This has led to the planning of a school holiday workshop, in collaboration with the community member, which will bring a more technical aspect to our MakerSpace. We have stayed true to our initial values with this workshop, that is to expose participants to library and literature discovery. Indeed, the school holiday workshop is based on the annual Children’s Book Council of Australia Children’s Book Week theme ”Books light up our world” and the idea is to share projects and skills in simple circuit-building and then applying this to some picture books to create book covers that light up.

Amongst many other things, a makerspace has provided this regional library with community engagement, a service for young people, and potential. Though it was introduced, predominantly, to offer a service to a particular community group, it has in fact given back to the library and as a result served the entire community.