The Role of National Libraries in the Big Data Era

IFLA will be represented by IFLA President-elect Donna Scheeder 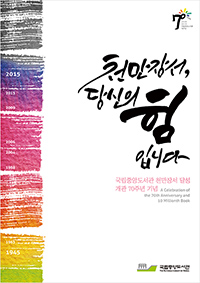 The National Library of Korea (NLK) is located in Seoul, South Korea and was established in 1945. It houses millions of volumes and some of the National Treasures of South Korea. This event will commemorate the 70th anniversary of NLK's founding and the addition of its 10 millionth volume. Following the commemoration, a day-long international symposium on the theme of "The Role of National Libraries in the Big Data Era" will also be held.

IFLA President-Elect Donna Scheeder will speak at the opening ceremony on 13 May and deliver the keynote speech at the symposium on 14 May.