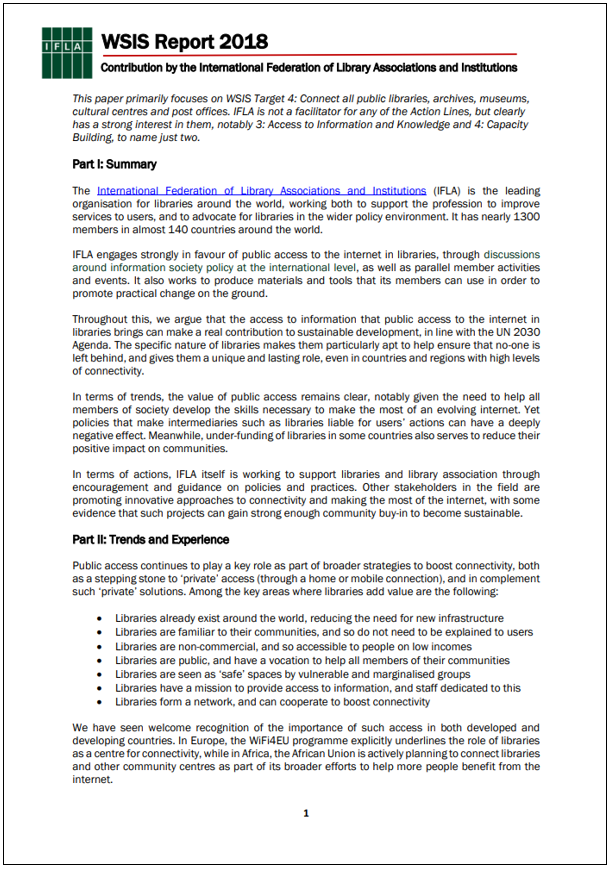 IFLA has answered the UN’s call for contributions on progress towards WSIS Action Lines and Targets. This process makes connecting all libraries to the internet a key priority. IFLA’s response highlights welcome recognition of the potential of libraries, but also worrying legal trends.

2018 marked the point where, according to the statistics of the International Telecommunications Union, the number of internet users worldwide rose above 50% of the population.

Public access through libraries and other community facilities has played an important part in this.

For millions, their first experience of the internet was in a library. Many of them still rely on libraries for a number of reasons – access to a full computer terminal, a desire for anonymity, a need for support.

There is no reason to think this won’t be the case for the remaining 50%.

In its submission to the annual review of progress towards the targets set as part of the World Summit on the Information Society (WSIS) process, IFLA underlined these contributions.

With getting all public libraries connected to the Internet a clear goal in the WSIS Conclusions of 2015, there has been progress in increasing connectivity, and recognition of the potential of libraries as WiFi hotspots.

IFLA’s own Library Map of the World includes numbers of libraries with publicly available internet connections, and will offer a key indicator of trends in future.

However, IFLA’s submission also highlights concerns about giving libraries liability for the content accessed by their users. There is also a need to address broader fears about privacy, both in the face of government and private actors.

IFLA is currently producing a policy toolkit on public access which will help libraries and library associations advocate for wider and better connectivity.

You can download the IFLA submission from our publication page. Read more about IFLA’s work on libraries and the information society.