Youth Volunteer in Libraries Across Russia

Volunteering in libraries and other cultural institutions in Russia has always been one of the important and discussed issues. Numerous publications in both print and Internet magazines show that librarians discuss this issue on a regular basis. They share information on their successful practices and experience of working with volunteers, conduct round tables and seminars on this topic, and continue thinking about how to increase the effectiveness of this activity in libraries.

There are many examples of successful initiatives when volunteer councils and communities work independently and lead various projects in the library and take an active part in its life. However, librarians do express some fear and doubts and the questions such as “Do libraries need volunteers?”, “What can they do at the library?”, “What kind of relations can we develop with them?” are often raised at professional meetings.

That said more and more libraries have decided that volunteers are a “breath of fresh air” and libraries do need them. What they should do is to work out their own way of attracting young people as volunteers to the projects, and then, while working together, to determine what forms of cooperation are the most successful and effective. 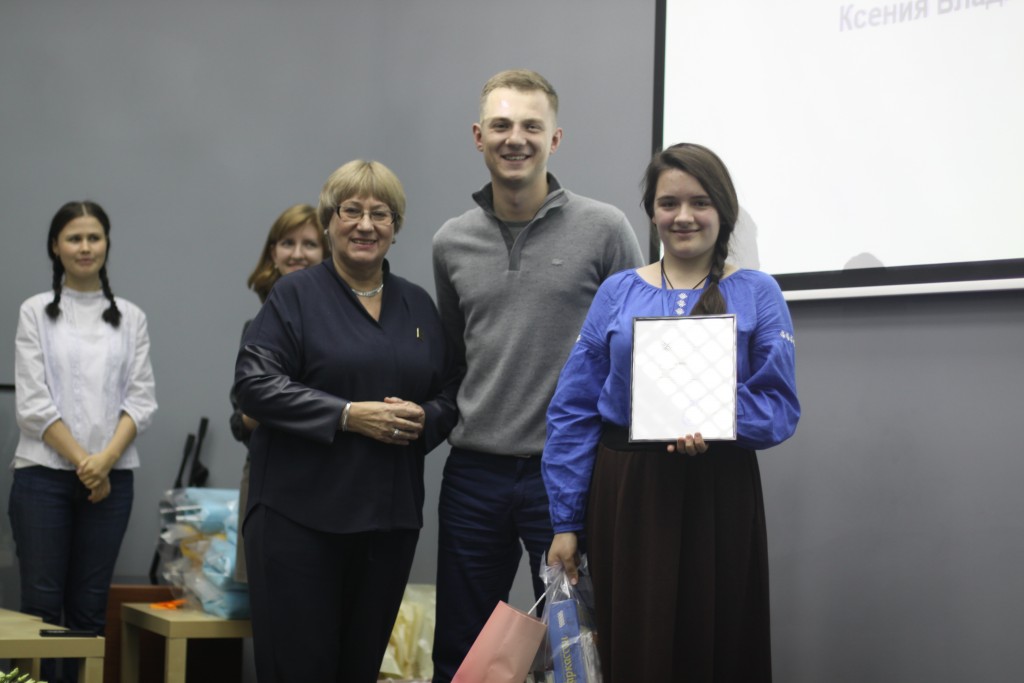 Irina Mikhnova, director of the RSLYA and Artemy Metelev, chair of the Association of Volunteer Centers with the winners of the national contest for the best youth volunteer project in a library

The Year of the Volunteer announced in 2018 in Russia can become a kind of stimulus that will help the library community, regardless of specialization, level of subordination and geographical location, to create a unique resource, obtain new experience with volunteers, launch new ambitious projects or just start involving volunteers, if they have not started doing this yet.

In 2018, the Russian State Library for Young Adults (RSLYA) and the Association of Volunteer Centers, with support of the Ministry of Culture of the Russian Federation and the Russian Library Association, launched the national contest for the best youth volunteer project in a library. A goal of the competition is to promote the development of voluntary cultural initiatives and to establish partnerships between cultural institutions and volunteer organizations through joint volunteer projects. Winners of the competition were announced at the 5th International Congress "Today’s Youth in the Modern Library" which took place October 11-12, 2018 at the RSLYA.  They were selected from among three categories:  Best Volunteer Library Project, Best Idea of ​​Volunteer Library Project, and Best Personal Experience of Volunteering in a Library.

The contest took place from February 27 through October 11 of 2018 in three stages:

The RSLYA received 358 applications from 63 regions of Russia, 38 of which have been included on the final list. The majority of applications were received from libraries of different types: public, educational and specialized ones, such as libraries for children and youth, research libraries, libraries for the blind and visually impaired. It should be noted that rural libraries took an active part in the contest, accounting for almost a quarter of all participants. Volunteer communities, NGOs, and individuals submitted their projects as well.

The contest showed a variety of types of volunteer work in libraries, as well as a wide range of areas and formats of projects aimed at solving problems of both global and local importance. Some of them related to professional career guidance, environment, social issues, civic engagement, education, etc. Others promoted reading among children and youth, development of creativity, multiculturalism and tolerance, culture preservation, health care and sports, social support of vulnerable groups of people and residents of remote places.

The projects submitted to the contest will provide the basis for the development of methodological recommendations on cultural volunteering in libraries.

Projects were evaluated according to the following criteria:  relevance and justification of the project’s issues, degree of involvement of volunteers, target audience, the systematic work with volunteers and the development of incentive methods, different formats of approaches, methodological work, project outcomes, and social impact.

The winners received commemorative prizes from the Russian State Library for Young Adults, the Association of Volunteer Centers, as well as from special sponsors - Toy.ru, online toy store, and the Hobby World, a Russian publisher of board games. The Association of Volunteer Centers awarded two projects with a special prize of 100,000 rubles (approx. 1,500 USD) as financial support to implement their projects. They were Let’s Do It! Volunteer School and #IAmGood Studio of Art Volunteering as a Way Involve Troubled Children in Volunteering Activities, presented by the City Library System of the city of Sterlitamak of the Bashkortastan Republic and the Pushkin’s Saratov Regional Library for Children and Youth accordingly.

The winners in the nomination "Best Volunteer Library Project":

1st place: Project "Volunteer Center of the Samara Regional Youth Library" (the city of Samara). Implementation period: from 2013 to the present. The Volunteer Center unites young people who actively participate in organizing library and social events and projects, which significantly change the life of a local community and the city of Samara on the whole. In addition, the volunteers of the Center perform the regular library duties at the SRYL.

2nd place: The project “The System of Clubs for Youth of the Novosibirsk Regional Library for Youth” (the city of Novosibirsk). Implementation period: from 2010 to the present. The System of Youth Clubs has existed at the NRLY since 2010 and has united the young people in thirty different clubs with a focus on different interests: literature, history, dancing and many others. The library plays the important role in the life of the clubs, assisting in the methodology and integration into the library's life.

3rd place: The project “Youth Club LiSa: Learn, Create, Enjoy!” (Library of the village of Dorokhovo, Moscow Region). Implementation period: from March 19, 2016 to the present. The project is aimed at organizing intellectual, creative, sport, and after-school educational activities for teenagers and young people. Since its opening, the Club has held more than 300 events.

The winners in the nomination “Best Idea of ​​Volunteer Library Project”:

The project is aimed at taking care of a minimum of 20 teenagers-at-risk by involving them into volunteering activities. It is a joint library’s project with two local youth centers and a university. The project activities include training and educational events, cultural events and art-therapy, which would ease social adaptations, and meetings with local celebrities.

2nd place: Project “Ay-Read!” (Satka’s Library System, Chelyabinsk Region). Implementation period: April - September 2019. More than 20 villages or 58% of local population of the Satka District do not have any access to library services. To solve this problem, librarians and volunteers, rafting on catamarans along the Ay River, which runs along the district, will deliver books to remote areas, gather information about the necessary literature and library services, and organize cultural events for residents and visitors of the district.

3rd place: The project “Audio textbooks for blind students of medicine” (Library of Tomsk Medical and Pharmaceutical College, the city of Tomsk). Implementation period: September 2018 - August 2019. Within the framework of this project, its participants will create audio textbooks for the blind students of the Siberian State Medical University, which will be updated to the current curriculum. Volunteers will read and record the texts, make a survey, and distribute the audio material to those who need it.

The winners in the nomination “Best Personal Experience of Volunteering in a Library":

1st place: Ksenia Shmelyova with the project “Literary Courtyard Ksyusha’s Fairytale” (the village of Mamonovo, Moscow Region). Implementation period: from May 19 to August 31, 2018. Within this project, Ksenia Shmelyova organized a private summer library for children of the village. Along with providing the kids with interesting children’s books, she arranged for other activities such as puppet shows, master classes, and folklore programs.  The library’s book collection consists of the children’s books, which belong to her family, and counts up to 500 items.

2nd place: Maria Novykh with the project “The Essay Contest “I am the Librarian of the Future”, the Tendryakov’s Library and Information Center for Youth, the city of Vologda). Implementation period: since 2016 to the present. The main goals of the project are to destroy the stereotypes about the library and library professions and to provide the students of schools and universities with the space for self-realization of schoolchildren and students. Under the guidance of Maria, the council carries out volunteering in various library and city events: promotions, literary evenings, master classes, poetry festivals.

3rd place: Julia Kirichenko with the project “Shine as Long as You Can” (The Urazovo Children's Library, the town of Urazovo, Belgorod Region). Implementation period: from 2010 to 2018. The project aimed to preserve the historical memory on the Great Patriotic War[1] of the region. Together with a group of volunteers, Julia met with local veterans, recorded their personal stories, collected photo and other audio and visual material, and shared them through online and printed publications.

The contest demonstrated the desire of people to unite around libraries for cultural, educational and social projects and confirmed that volunteering, in particular youth volunteering, is very promising. Cooperation of libraries with voluntary assistants will make it possible to expand the library space, develop new partnerships, gain visibility in the local community and attract attention to the problems of the library, and develop new services in accordance with modern needs and public expectations.

[1] The Great Patriotic War is a term used in Russia to describe the conflict fought during the period from 22 June 1941 to 9 May 1945 along the many fronts of the Eastern Front of World War II between the Soviet Union and Nazi Germany and its allies. (Source: https://en.wikipedia.org/wiki/Great_Patriotic_War_(term))