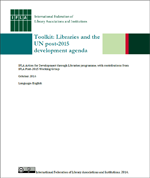 As the United Nations reflects on the future of global development and the post-2015 agenda, access to information must be recognised as critical to supporting governments to achieve development goals, and enabling citizens to make informed decisions to improve their own lives. IFLA, the International Federation of Library Associations and Institutions, believes that libraries help guarantee that access.

IFLA has launched a toolkit to support library institutions and associations and other civil society organisations to advocate for this position. The toolkit provides background on the issues and practical advice on how to set up meetings with government representatives. Template letters, talking points and examples of how libraries help meet development goals are included. The toolkit is available for download from the IFLA Libraries and Development website.

The timeline until the final post-2015 goals are decided is short. If libraries are to be part of the discussion, action needs to be taken now and until September 2015.

This urgency is echoed by Her Royal Highness Princess Laurentien of the Netherlands:

I hope you will agree that collecting signatures for the [Lyon] Declaration is a start, not a result. So in that sense, I also invite you start thinking about what you will do on Friday, once the conference is over. Who will you call? What will you tell him or her? And what strategic and ambitious goals will that phone call pursue?”

Her Royal Highness Princess Laurentien of the Netherlands,
speech at the IFLA World Library and Information Congress in August 2014

Our objective is that on 1 January 2016, libraries will be ready to support implementation of the new development agenda, and that governments will be seeking libraries’ involvement. To achieve this, IFLA seeks the support of all of its national members.

About IFLA: The trusted global voice of the library and information profession

The International Federation of Library Associations and Institutions (IFLA) is the leading international body representing the interests of library and information services and their users. IFLA is an independent, non-governmental, not-for-profit organization with over 1400 members in 150 countries.

Guided by our Strategic Plan 2010-2015 and Key Initiatives, we work to improve access to information and cultural heritage resources for the global community in this rapidly changing digital and print environment.