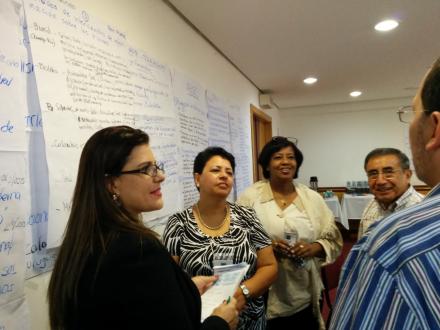 The Latin America and Caribbean regional convening explored a range of needs for libraries and associations in the region, and the impact of economic and political developments on the continent. In Peru, for example, the Colegio de Bibliotecólogos del Perú (CBP) noted the importance of strengthening regional library networks and services as the government goes through decentralisation. Strengthening regional libraries and professionals is also a high priority in large countries such as Brazil. Capacity building, partnerships and good governance are key for many participating associations to be able to increase their sustainability. Cultural heritage and preservation are essential in a region which has suffered many natural disasters in recent years, and several countries showed interest in developing projects on this theme. Many library schools in the region are very strong, and the possibility for collaboration to offer ongoing professional development was explored. Regional issues, such as ways to increase capacity in marketing, strategy and communication across borders were proposed as potential cross-country projects. The role of libraries in human development and social integration was also high on the agenda.

Beyond these issues, the convening introduced participants to workshops on building partnerships, the role of libraries in society, planning, and advocacy. 8 associations participated in the convening, including FEBAB (Brazil) which acts as a national and umbrella association in the country. In addition to the association representatives, trainers came from Peru, Mexico, Brazil, Uruguay, and Argentina. More than 25 people participated in the event. By the end of the convening, associations had prepared a draft development proposal to take home to their association for discussion and endorsement, to take forward as a project proposal. Projects will be implemented on a rolling basis over the next three years and could include BSLA workshops at national and regional conferences, projects between groups of countries or for the region as a whole, or advocacy activities. 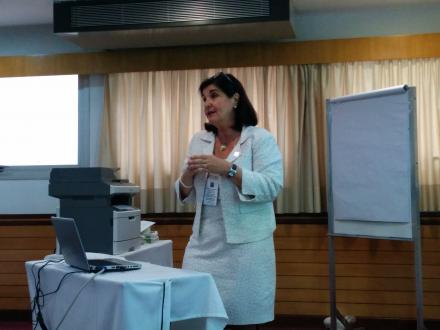 At the opening session, IFLA Governing Board member Glòria Pérez-Salmerón presented an overview of IFLA, strategic activities, and the role of associations to put libraries on the agenda and foster collaboration. Later in the meeting, she presented the work of FESABID, the umbrella association in Spain, to emphasize the potential of associations to play a leading role in supporting libraries, and to highlight collaboration in Iberoamérica. Sigrid Weiss, chair of the IFLA Latin America and Caribbean section, and Jaime Rios Ortega, Manager of the IFLA Regional Office for LAC welcomed participants to Brazil and encouraged associations to work collaboratively for the benefit of their own country, and the region.

The convening was hosted by FEBAB and IFLA, with support from the Universidade de São Paulo. For more information about the BSLA programme, visit the IFLA website.