Get Into Blue Shield Guide

Its roots are in the years following the Second World War. Following the widespread destruction, UNESCO adopted the 1954 Hague Convention for the Protection of Cultural Property in the Event of Armed Conflict and its First Protocol (1954) and Second Protocol (1999) which created rules to protect cultural property during armed conflicts. This was the first widely adopted international treaty and highlighted the concept of common heritage. 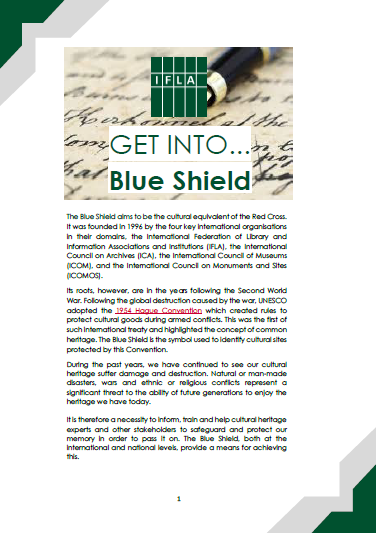 During the past years, we have continued to see our cultural heritage suffer damage and destruction. Natural or man-made disasters, wars and ethnic or religious conflicts represent a significant threat to the ability of future generations to enjoy the heritage we have today.

It is therefore a necessity to inform, train and help cultural heritage experts and other stakeholders to safeguard and protect our memory in order to pass it on. The Blue Shield, both at the international and national levels, provide a means for achieving this. But to continue doing so, we need your help. Your contribution at a national level is key to the goals. IFLA has therefore produced a guide: Get into Blue Shield. It'll help you better understand what Blue Shield is, and how you can become involved.