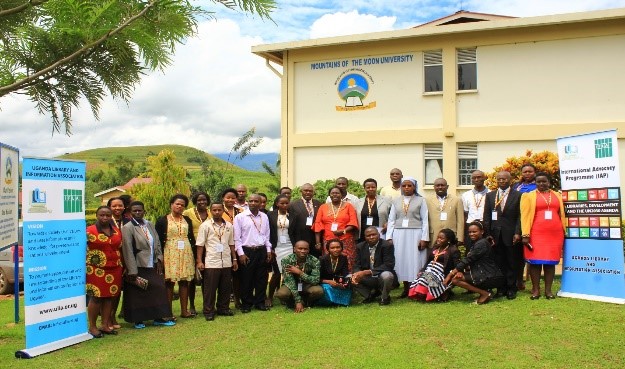 IFLA supported an International Advocacy Programme project in East Africa in 2017. After completion of this regional project we asked the project team some questions and this is what they told us about the four workshops they organised.What did they learn about the role of policy makers?

What were your goals?

Our goals for the East Africa Awareness workshops were to:

How did you plan to make this happen?

We planned to implement four regional workshops focusing the three regions of Uganda of Western, Northern and Eastern regions and the East Africa region which included the participants from central region of Uganda, Rwanda, Kenya and Tanzania over a period of five months from August – December, 2017.

Participants at an IAP workshop in Uganda

How did it work?

The project team held pre-workshop meetings with the Association Executive to discuss the programme and the key persons/librarians to be invited for the workshop.  Invitations were sent both on email and physical address and follow up phone calls were made to ensure the availability of the participants for the workshop.

During the training sessions, the trainers used a combination of IFLA's PowerPoint presentations, case study and discussion/participatory approaches to deliver and share information and experiences. Soft copies of the slides for the modules presented were provided to the participants at the end of the training. The training adopted an interactive and participatory approach that aimed at involving the participants’ interest in learning as much as possible.

Question and answer sessions were used throughout the training period to create an interactive environment. Flip charts were used when making illustrations and/or highlighting discussion points. In addition, participants were issued with an information kit which included the handouts about the programme to enable them make references.

Through the mixed training methods, participants were able to interact and share work experiences with their colleagues and the trainers.

How did you use communications during the project?

Communication is a vital element of any well-managed project. During the project, a number of communication channels were used for its promotion which included: listservs emails, social media, SMS messaging and phone calls.

The workshop events were also broadcast on the Uganda Broadcasting Television (UBC) - the National Television Broadcaster to a wider public domain. In addition a TV talk show was conducted to raise awareness about the role libraries can play in implementing and achieving the SDGs and UN 2030 Agenda.

What did you learn in the process?

The project team realised that they needed to involve as many policy makers as possible for them to appreciate the role libraries play in implementing the SDGs in their regions. The librarians need to work with the community, technical people, and policy makers if their roles were to be appreciated in the achievement of SDGs. In addition, to continue advocating for libraries inclusion in the SDGs activities/events. Advocacy is very new to the library sector because it is not included in the LIS curricula in the country and there have never been such opportunities to acquire such knowledge and skills.

What are your next steps?

From the discussions and evaluation made, the participants generated a number of which included: