Getting It Right: At Second Marrakesh Assembly, IFLA Launches Guide to Implementing the Treaty in Europe 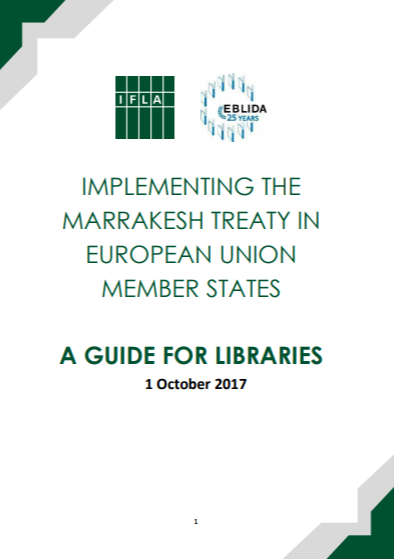 Following agreement in the European Union on legislation to implement the Marrakesh Treaty, Member States now have a year to comply. By 11 October 2018, all 28 countries need to give people who are blind, have visual impairments or other print disabilities, as well as the institutions that serve them, the possibility to make and share accessible format copies of books.

This will likely involve passing laws and regulations which will have a significant impact on efforts by libraries to end the book famine. Having worked hard, alongside partner organisations EBLIDA and EIFL, to ensure the best possible European laws, now is the time to get it right nationally.

To support libraries and library associations, as well as inform decision-makers involved in this process, IFLA has therefore worked, with support from EBLIDA, to produce a Europe-focused version of the Guide the Marrakesh Treaty produced by EIFL (Electronic Information for Libraries). This explains the legislation, step by step, and then offers recommendations on what should – and shouldn’t – be included in laws.

Different versions – in pdf and word, as well as small and large print, are available here. We welcome comments and suggestions.