Keeping up the Pressure in Geneva – A Report from WIPO

Libraries and Archives delegation at SCCR meeting at WIPO

Libraries and archives made a strong showing in the 32nd session of the World Intellectual Property Organisation’s (WIPO) Standing Committee on Copyright and Related Rights (SCCR), which met earlier this month in Geneva.

On the agenda were the legal exceptions and limitations to copyright that allow libraries and archives to do their jobs, and how to make sure these work globally. IFLA was joined by a broad delegation of librarians and archivists, bringing together voices from Berlin to Baltimore, and Montevideo to Milwaukee.

Libraries and archives representatives made a total of 25 interventions to the meeting of experts and decision-makers from around the world, highlighting the key role of libraries and archives in promoting access to knowledge, and how inadequate legal frameworks hold them back.  In addition, IFLA held a “side event,” focusing on how the digital world is impacting libraries and archives, and managed a busy schedule of informal discussions with regional groups of Members States.

Our main message is that better laws in individual countries – something which is desirable in itself but far from achieved – will not be enough. It is only through action at the international level that it will become possible to build a global information society, built on equitable access to knowledge around the world. Progress is inevitably slow, but the potential rewards are high and essential.

In particular, IFLA and others made the case for: 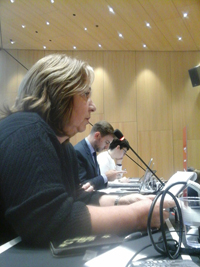 IFLA strongly welcomed the warm and eloquent support of the Asia Pacific, Latin American and Caribbean, and African regions. They highlighted the contribution that libraries and archives can play in accelerating development – many countries in these parts of the world are indeed investing heavily in offering high-quality library services to their citizens.

There was continued opposition from Group B (industrialised countries), who claimed that the current situation is ‘well-functioning’. This is far from the experience of librarians, archivists and the people they serve – including those in Group B areas such as the EU - who are faced with uncertainty, cross-border barriers, and an inability to provide services that digital technology has made possible for many years already. Their opposition to meetings at a regional level, which would provide an opportunity for more focused discussions with a range of experts, is disappointing and hard to justify.

The alternatives proposed by rights-holder organisations are a poor solution. Standing still – for example claiming that people needing a document that isn’t available in their own country should have to pay the airfare in order to look at a print-out in a library abroad – is a recipe for ridicule.

And licencing – ad hoc contracts for works or groups of works – is not much better. Over and above the complexity it creates, it often overrides exceptions that exist in national law, imposes unreasonable costs, particularly damaging for citizens and institutions in developing countries, and is completely unsuitable for works where there is no known or contactable rights-holder.

Other agenda points included a report on copyright and education, proposals on analysing the workings of copyright and rewards in the music industry, resale rights (i.e. allowing an artist to benefit when one of their works is re-sold), and providing access for persons with disabilities beyond those covered by the Marrakesh Treaty.  The first half of the meeting was spent talking about broadcasting. Relevant discussion documents are available on the WIPO website.

We welcome the continued momentum in the Committee, and look forward to further discussions in November. In the meanwhile, IFLA welcomes opportunities to partner with WIPO in improving the situation for libraries and archives on the ground.