Bibliotherapeutic workshops for children and youth help them to welcome every feeling as a valuable guide in exploring their inner selves, overcoming unpleasant psychological states and making self-confidence stronger

In Children’s  Department of Belgrade City Library we organize a number of various, free of charge, educational and creative programs and workshops for children and youth, such as storytelling, socializing with writers, musical and art workshops, creative writing, origami workshops, etc. with the aim to encourage children to read, to enrich their world, to develop reading competencies, information literacy and to have fun at the library. Inspired by good expamples of using books for therapeutic purposes also, we organized several bibliotherapeutic workshops which, through discussions based on selected literature, helped children and youth gain better insight into certain situations, solve some problems and improve personal growth and development.

According to the Greek historian Diodorus Siculus, a potential of  bibliotherapy has been known since Egyptian king Ramses II ordered an iscription “House of Healing for the Soul” to be put above the entrance to the royal chamber where books were stored. 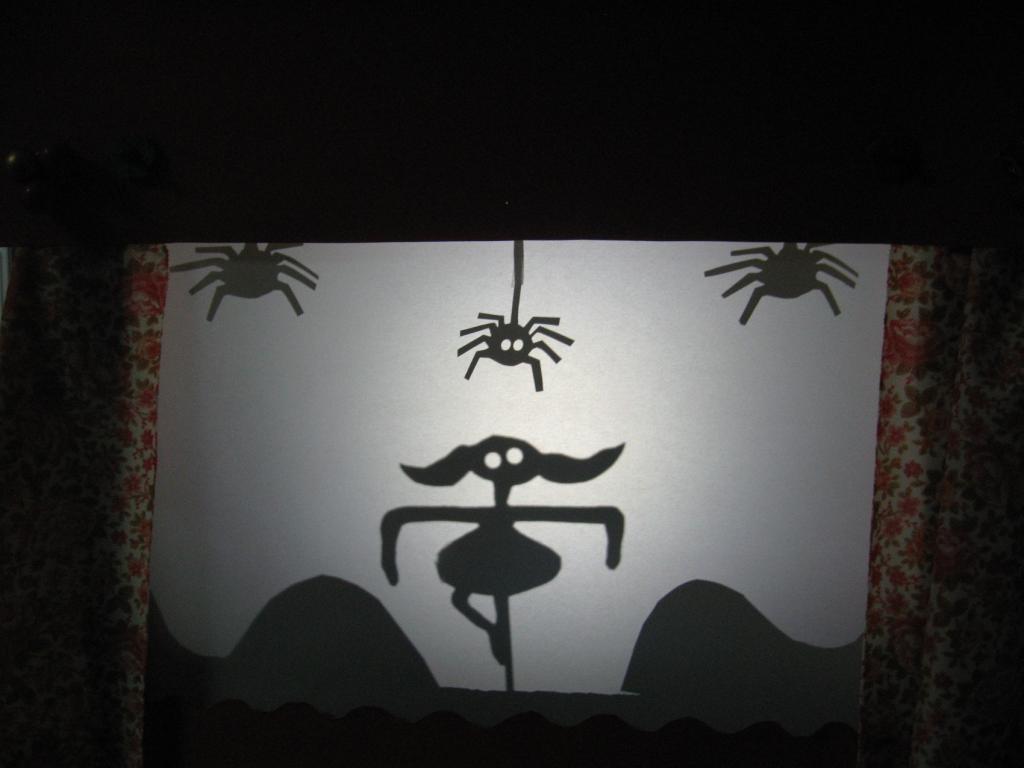 Bibliotherapeutic workshop “The Little Nightmare” has been inspired by the picture-book of the same title written by Irena Zelena, who struggled herself with night fears as a child and as a grown up decided to write a story that would make such struggles easier for children. The reviewer of the book, psychologist Helena Rajčić, confirms that the “The Little Nightmare” is the right choice of the book for bibliotherapeutic purposes, since “this picture-book makes children familiar with the world of dreams in a friendly, understandable and cheerful way. Bad dreams disturb children because they do not understand well the difference between dreams and reality. Reading a story that deals with fears has a soothing effect and helps children feel better, happier and more relaxed. It is important to talk with children in order to show them we understand and appreciate their feelings.”

Following the recommendation of the book reviewer, and in order to help children overcome one of the most usual developmental fears, we organized workshops for children aged 5 to 8. Preschool and younger school children came with their teachers to our library and the picture-book “The Little Nightmare” proved to be an excellent didactic tool for starting conversation with children who still can’t describe well their feelings or dreams and whom the workshops helped feel safer and protected.

After the introductory conversation with children about nightmares and feelings, we enjoyed a little shadow theatre performance based on the picture-book and involving a storytelling technique. Heroes of the story came to life before the eyes of the children. Children could empathize with the troubles of the Little Nightmare and the Nice Dream, and thus realize that the heroes of the story were also small and terrified creatures eager for friendship and love. Then children, split up in two groups, drew their nice dreams and their nightmares and stepped up, two by two, confronting their drawings and helping the nice dreams overcome the nightmares. This way they learned to face their fears and help their friends do the same. The teachers were advised to complete the final phase of the bibliotherapeutic process in kindergartens and schools, through making with children figurines of nice dreams that would remind them of the great time they had in the library while overcoming their nightmares. 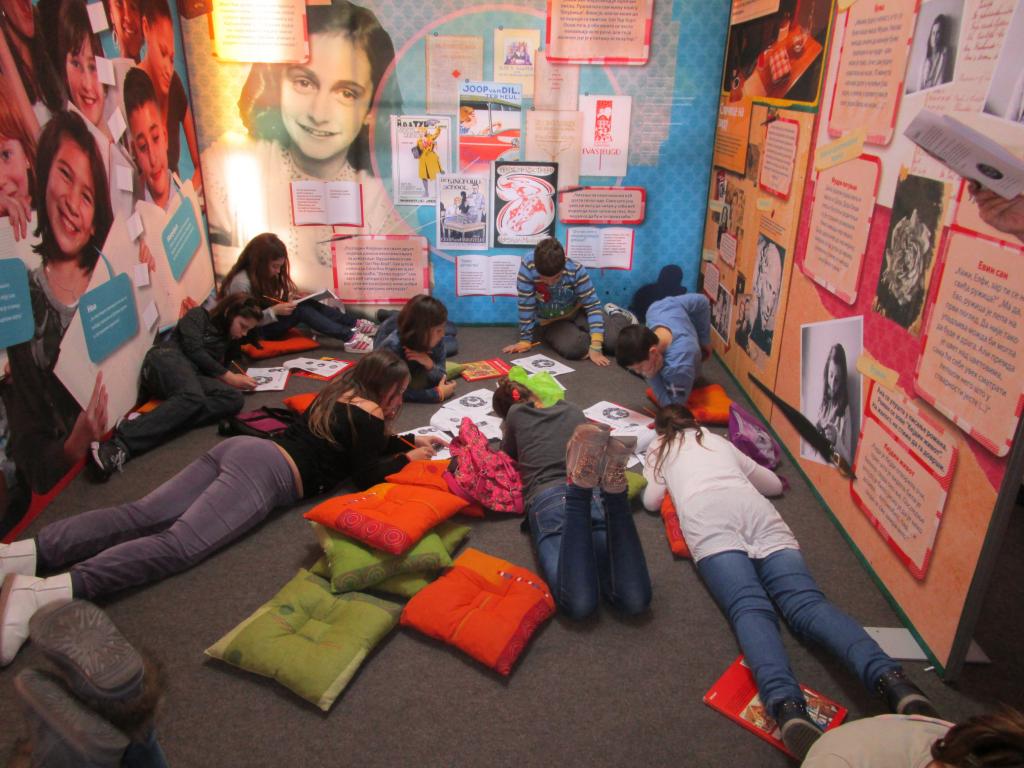 Since we hosted the travelling exhibition on Anne Frank in the Children’s Department of Belgrade City Library, at the end of 2014 and the beginning of 2015, within the international project “Days of Remembrance”, we used this chance to organize a series of educational bibliotherapeutic workshops for children aged 9 to 14, based on the educational concept “Reading and Writing with Anne Frank”. Primary goal of the workshops was to present Anne Frank, a teenage girl who in difficult moments healed herself through reading and managed to express herself through writing. While motivating pupils to read and write more, the exhibition and the included workshops were at the same time an introduction to the basic concepts of the education on Holocaust, anti-Semitism, racism, crimes committed in the World War II, as well as on the roles of crime perpetrators – victims – passive observers – helpers, and on the concept of active choice and personal responsibility when it comes to respecting and defending human rights.

Reading parts of The Diary of Anne Frank and solving research tasks from professionally designed woorkbooks, children actively participated in the workshops and got familiar with Anne Frank, a girl of their age, learning about the healing effect of books and writing diary and stories, that helped Anne in the long years of uncertainty and despair. Identifying themselves with her, children developed the feeling of empathy, learned about themselves and, thanks to the motivation the book gave them, turned out to be surprisingly willing to talk about themselves, their dilemmas, fears, feelings, to say sincerely and out loud what they thought of themselves and what others thought of them. Younger participants of the workshops had a chance to write their first rondeau poems (8 verse poems where first, fourth and seventh verses are identical, being repeated as in a sort of a dance) in which they shared with us how they felt when reading books, while older pupils wrote twaiku poetry (a new form of poetry based on haiku, typed in three lines in text messages, consisting of 140 characters) expressing their personal feelings, fears and wishes. The workshops itselves showed the importance of literary works for the purpose of bibliotheraphy.

Motivated by the great response to the workshops, and on the occasion of the  2015 International Children’s Book Day, we organized literary competition called “Do (Not) Read My Diary“. We received many great works showing the willingness and the need of children to fully open their souls and share with us their innermost feelings and experiences.

“What Are We Waiting For?” Workshop

For older teenagers, aged 14 to 18, we organized in the Belgrade City Library multimedial bibliotherapeutic workshop titled “What Are We Waiting For?“. Based on the analysis of the survey we conducted in several secondary schools in order to discover which topics this age group is interested in, we prepared a workshop about sexuality, aggression, loneliness and alienation of young people. A librarian, a psychologist, an art historian, a photography student organized the workshop together with  two pupils of the third grade of secondary school who made a short movie for the occasion dealing with the violent behavior of adolescents. The audience was secondary school pupils and their teachers. Goal of the workshop was, through discussion with pupils, to gain insight into frequency, forms, motivation, reasons and consequences of violence among adolescents, to understand better their needs and problems related to sexuality and aggression, and to find and offer possible solutions. Problems were considered from several different perspectives. The psychologist talked about the phenomenon of sexuality and aggression of young persons, the librarian recommended some useful adolescent psychology books, the art historian gave a chronological review of the phenomenon in history and art, the photography student illustrated it through photographs, and the short movie of young authors sparked great interest and heated reactions, motivating the audience to dynamic discussion and mature dialogue. In a relaxed and informal atmosphere, secondary school pupils learned, using different knowledge and sources of information, to step out of the box, to put themselves in someone else’s shoes and to develop empathy. Probably the best testimony of the success of these workshops is a succinct comment of one of the teachers: “I would like to commend the yesterday’s workshop – in an unlabored way it engaged young people and motivated them to freely communicate. My pupils are satisfied. So am I.“