UNESCO has endorsed the IFLA Manifesto for Digital Libraries at its General Conference 2011. The Manifesto provides principles to assist libraries in undertaking sustainable and interoperable digitisation activities to bridge the digital divide - a key factor in achieving the Millennium Development Goals of the United Nations. Digital libraries are essential for access to information, and for preserving national heritage. 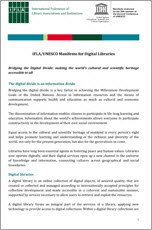 IFLA President Ingrid Parent welcomed the endorsement: "IFLA believes that access to information resources supports education and health as much as cultural and economic development. Information about the world's achievements allows all people to participate constructively in the development of their own social environment." She further pointed out that equal access to cultural and scientific heritage is every person's right. "It helps promote learning and understanding of the richness and diversity of the world and its peoples, not only for the present generation, but also for the next generations", Parent said.

Promoting the free flow of ideas is also one of UNESCO's priorities. Janis Kārkliņš, UNESCO Assistant Director-General for Communication and Information stressed the importance of digital libraries within UNESCO mandate: "Their ability to reach and serve broader communities, while offering access to a range of information that would otherwise have been difficult, is perhaps the key asset of digital libraries. Users can freely browse library collections irrespective of the time of day or their physical location". However, Kārkliņš cautioned that "Marginalized groups and disadvantaged peoples could remain on the periphery of knowledge unless barriers to access, including digital illiteracy, were reduced". He therefore lauded the endorsement of the Manifesto as "part of the efforts of UNESCO and its partnership with IFLA to develop strategies for the sharing of information".

The IFLA Manifesto for Digital Libraries is also an important instrument for achieving the objectives of the World Summit on the Information Society (WSIS). Many countries have created national digitisation programmes, and more will do so. IFLA strongly supports and encourages both national and international digitisation strategies as well as single library and partnership initiatives. Digital libraries can only offer full access to the heritage of nations if steps have been taken to develop policies and to implement initiatives for digitising documents and records, as written down in the Geneva ‘Principles' and the Geneva ‘Plan of Action' of WSIS.

The Manifesto was initiated by former IFLA President Claudia Lux (2007-2009). Prior to UNESCO's endorsement, it was approved by the IFLA Governing Board in 2010 and by the UNESCO intergovernmental programme Information for All (IFAP) in February 2011.

The endorsement enables IFLA members to work with UNESCO Member States within the context of national e-strategies aimed at increasing access to information and development. It provides IFLA members with a stronger foundation on which to lobby for and to implement digitisation activities.

IFLA maintains a long and lasting partnership with UNESCO notably in the areas of library cooperation, promotion of universal access to information and information preservation. IFLA has had formal consultative relations with UNESCO since 1947. During this time, UNESCO has endorsed several important pieces of IFLA policy, including the IFLA/UNESCO Public Library Manifesto, in 1994, and the IFLA/UNESCO Multicultural Library Manifesto, in 2009. The previous IFLA Manifestos endorsed by UNESCO continue to have a great impact at a global level and contribute to the development of new frameworks for high-quality library services.