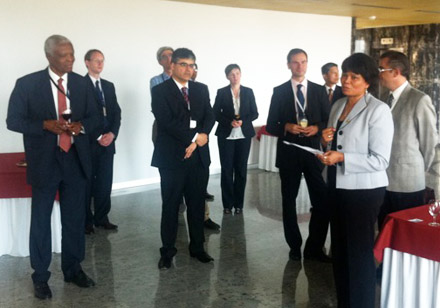 On Tuesday 21st June 2011 IFLA co-hosted a reception with the World Intellectual Property Association (WIPO) for Member States at the 22nd meeting of the WIPO Committee on Copyright and Related Rights (SCCR). IFLA was represented by President Ellen Tise, and WIPO by the Assistant Director General, Culture and Creative Industries Sector, Trevor Clarke.
Mr Clarke is a plenary speaker at IFLA WLIC 2011.

The SCCR is presently discussing copyright exceptions and limitations for visually impaired people with a view to recommending an international instrument that will increase the number of accessible material for blind and visually impaired people. Interventions made by the library community at SCCR/22 can be found here and here. This meeting is part of a work programme that will focus on copyright exceptions and limitations for libraries and archives in November 2011. As part of the preparation for the November meeting, IFLA, EIFL and the International Council on Archives and other library groups prepared a draft treaty on Copyright Exceptions and Limitations for Libraries and Archives which we hope will inform discussions in November and lead to international action that will benefit libraries and archives worldwide.

The reception was a good opportunity for IFLA to thank the WIPO Member States for their attention to this important issue. As has been shown in a WIPO study, as well as the IFLA World Report, the current national and international systems of copyright exceptions and limitations for libraries and archives (when they exist at all) have not been updated for the digital environment. Libraries are not being accorded the minimum level of protection and legal certainty that is required to provide both historical and new services, in pace with technological change. WIPO Member States have the capacity to draft an international instrument that could provide a mandate to update exceptions for libraries and archives worldwide, and guidelines on the issues that have to be addressed to protect adequately library and archive functions as well as legitimate copyright interests.

In her remarks at the reception, Ellen noted "We are very happy that member states have given us an opportunity in November this year to discuss copyright exceptions and limitations for libraries and archives. Furthermore, we are extremely grateful for all of the member states that have worked with us to achieve this opportunity, particularly the members of the African Group who have put forward a proposal in favour of libraries and archives. We look forward to working with all member states to create a better copyright framework for libraries, archives and their users."

WIPO Assistant Director General Trevor Clarke is a plenary speaker at this year's World Library and Information Congress in Puerto Rico. He will discuss the way libraries and WIPO can work together to improve access to copyrighted material, and he will also participate as a panellist in the CLM session on the proposed treaty for libraries and archives.

Libraries and archives work under a patchwork of copyright provisions that differ in scope and effect from country to country, and that increasingly fail to address the legal and policy challenges of the global digital environment.

To read why libraries need an international treaty have a look at the PDF leaflet.

CLM (Committee on Copyright and other Legal Matters)