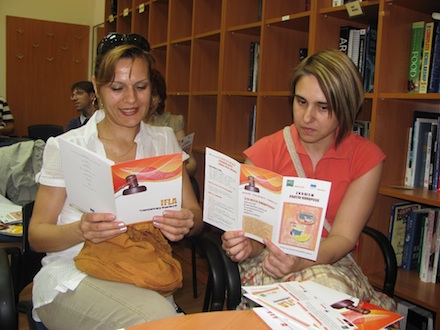 In Serbia, rampant corruption is present and almost all spheres of social life are affected by it. In the process of fighting against corruption it is very important to act preventively and to educate the public through special programs. IFLA ALP selected the Serbian Library Association (SLA) project “Transparency, Good Governance and Freedom from Corruption” to be funded in 2010/2011, with which SLA was given a great opportunity to support anti-corruption campaigns in the lirary community. The project “Transparency, Good Governance and Freedom from Corruption” supports the realisation of the principles of the IFLA Manifesto on Transparency, Good Governance and Freedom from Corruption. Libraries in Serbia have been identified as one of the key elements for open access to information, which is crucial to democratic information society development.
The project consisted of conducting activities to raise awareness about the problem of corruption by promoting and providing free access to information and freedom of expression in the library community in Serbia.

The main goal of this project, to raise the awareness to the problem of corruption by promoting and providing free access to information and freedom of expression, was met.

The project supported anti-corruption practitioners in Serbia. Libraries are a partner in this area. The libraries are trusted institutions, citizens believe in their libraries. The citizens at the forums and through all activities in the project said they would rather go to the library for any information than to the local or state government.

The first presentation on the project was organized December 14, 2010 at the celebration of Librarians’ Day in Nis. The Project Manager presented all the goals and activities which were to be undertaken by SLA during its implementation to over 70 librarians from all over Serbia.

SLA selected seven public libraries to take part in the project. The criteria were: geographic presentation, libraries which accepted to participate and those which offered to take part. The first meeting was held on November 22 in the City Library of Belgrade. The meeting was attended by the Managers of seven libraries and Vesna Crnogorac, the Project Manager. She represented the project in brief, and also the goals which were to be achieved through project implementation: workshops, campaign and collecting the material on the topic and publishing the material on the web sites of the Libraries.

Starting from November 20 2010 to February 2011, SLA communicated consistently to gain support from other organisations. Cooperation was made with the following institutions, which all took part in the project:

The Workshop was held at Goethe Institute Belgrade. The workshop was led by Barbara M. Jones, Director of the ALA Office for Intellectual Freedom and Executive director of the Freedom to Read Foundation, USA. Gordana Sunjevaric, General Secretary Assistant to the Commissioner for Information of Public Importance and Personal Data Protection of the Republic of Serbia also spoke at the workshop.

15 librarians attended the workshop. Participants were given learning materials in advance (via email) so they were well prepared for Workshop. SLA also provided online platform within its web site for remote access to learning materials.

The purpose of the training workshop was to engage and train librarians on very important issues about fighting against corruption and the role that libraries could have in our society.

The guest speaker, Ms Gordana Sunjevaric, General Secretary Assistant to the Commissioner for Information of Public Importance and Personal Data Protection of Republic of Serbia reported about citizens rights regarding Serbian Law on Free Access to Information. She also presented detailed facts about the number of penalties that have been imposed by the Commissioner. She pointed out the main trends and strategy in cooperation with Government and other subjects.

The Association of Libraries in Serbia printed a flier with parts of the Manifesto and the Workshop Manual. The title is “Against Corruption with Knowledge”. The cover page contains a drawing by an 11-year old boy for a Prize Competition organized by the Anticorruption Agency. SLA acquired approval from his parents to use the image in the campaign.

The advocacy campaign on Transparency in libraries started at the end of February and was completed in mid-July 2011.

The librarians from public libraries in Pirot, Bor and Kladovo attended the panel discussion at Public Library of Nis. The Forum caused a large media attention due to the presence of MP Ms Vesna Pesic.

All of them were talking on issues within their authority:

All the panel discussions were very well attended, especially by librarians from public, school and academic libraries in Serbia.

A lot of attention was received from the local media (the Project Manager was interviewed twice on TV in her hometown) and strongly supported by press. All the information about the activities was regularly uploaded on websites of Serbian Library Association and websites of participating libraries.

The project was extended with new activities in Subotica (North, on Serbian-Hungarian border), Vranje (South of Serbia), and Novi Pazar, a very multiethnic town near Kosovo.

The support consisted of presentations held by Vesna Crnogorac, Project Manager on project goals, IFLA Manifesto and informing all the attendees on the IFLA Basic Mission. Vesna Crnogorac held lectures and open discussions at seven American Corners in Serbia and in that way coverage was made for the whole territory of Serbia.

After the campaign in public libraries and American Corners, librarians who participated in the Workshop in Belgrade held their own workshops for the colleagues in their libraries. Each library had 12 attendees on average. Thus, 72 new librarians were trained in their towns to pass on information on the role of librarians in free access to information.

Being aware of the fact that the fight against corruption must last much longer than a year or two, the project will continue beyond the time funded.

Serbian Library Association would like to express sincere gratitude to IFLA, ALP, and Barbara M.Jones for a very successful Workshop.