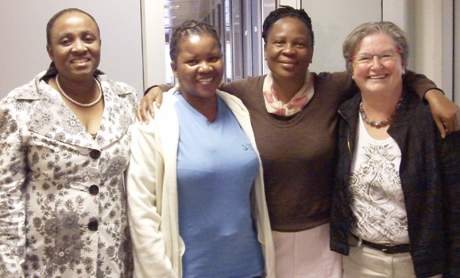 Botswana Library Association (BLA) was formed in 1978. Membership of the association is open to all library workers, archivists, bibliographers, and information workers. BLA went through a dormant period for nearly a decade until 2008. Since 2008, the association has worked to hold annual national conferences, meetings and other activities.

Botswana, in Southern Africa, is politically and economically stable, transparent [1], and has a free press [2]. The country has benefited from the exploitation of its natural resources, primarily diamonds, which has led to a decent quality of life for many. Yet the nation suffers from a very high rate of HIV infections as well as educational, technological and income inequality in the rural population. The literacy rate was estimated at 81% in 2003. [3]

Academic, ministerial, school and 32 public libraries operate across the country. More than 68 village reading rooms, together with a small number of community libraries established by NGOs, serve rural populations. Libraries in Botswana are being decentralised from the Botswana National Library Service that runs the country’s public libraries. The use of ICT is also increasing in public libraries, making their services more appealing to the general public as opposed to only school children as was the case in the past. More than 20 public libraries now offer free public access to computers and Internet, which has resulted in an increase in their membership.

Botswana hosted the important African library conference SCECSAL in 2010, with more than 300 participants from Eastern, Central and Southern African associations and libraries.

When the BSLA project began, there was a recognised need for a strong association to represent all libraries in Botswana.

The Botswana Library Association held a stakeholder summit, and two workshops in 2011. BLA worked with core trainer Winnie Vitzansky (Denmark) during these activities, the initial needs assessment, and the final evaluation meeting. In addition to these activities the library association elected a new executive committee (board) in 2010, organised strategic retreats for the board, and was invited to give a number of presentations across the country.

Through the association’s work in the past two years, library and information professionals have a voice, and the confidence to turn towards the future – to advocate for better staffed school libraries, and to take an active part in the implementation of the country’s new national library policy.

Botswana Library Association has revived and strengthened itself, and is now turning to the challenge of increasing representation across the country through branches of the association. Increased membership comes with increased expectations, which the association will seek to meet through professional development events, workshops, and other activities.